The New Turkey and its Discontents Book Launch and Public Panel

The New Turkey and its Discontents to be delivered by the authors Dr Simon Waldman and Mr Emre Caliskan. 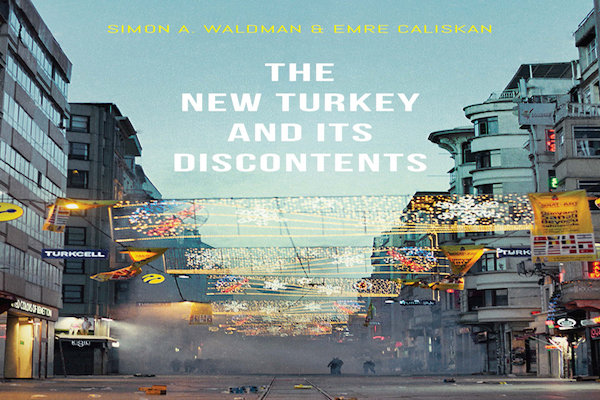 Today’s Turkey little resembles that of recent decades Newfound economic prosperity has had many unexpected social and political repercussions, most notably the rise of the AKP party and President Erdoğan. Despite unprecedented electoral popularity, the conduct of the AKP has faced growing criticism: Turkey has yet to solve its Kurdish question; its foreign policy is increasingly fraught as it balances relations with Iran, Israel, Russia and the EU; and widespread protests gripped the country in 2013, as did an unsuccessful coup in 2016.

The government is now perceived by many to be corrupt, unaccountable, intimidating of the press and intolerant of political alternatives. Has this once promising democracy descended into a tyranny of the majority led by a charismatic leader? Is Turkey more polarised now than at any point in its recent history?

These are among the questions at the heart of The New Turkey and Its Discontents, which traces Turkey’s evolution under Erdoğan’s leadership, and assesses the likely consequences at home and abroad.

This event is kindly hosted by  Rt Hon Joan Ryan MP. The event will take place between 7-9 PM on Tuesday 15th November 2016 in Committee Room 8, House of Commons. Please note security checks are required to enter the House of Commons. We kindly ask you to arrive at 6.30PM to allow the event to start and end on time.

Book Launch and Public Panel: “The ‘New Turkey’ and its Discontents”

Please book a free ticket via the following link: https://www.eventbrite.co.uk/e/book-launch-and-public-panel-the-new-turkey-and-its-discontents-tickets-28859967941

There will be a book sale following the event.

We are pleased to announce Centre for Policy and Research on Turkey (Research Turkey)’s book launch and public panel titled “The ‘New Turkey’ and its Discontents” to be delivered by  the authors Dr Simon Waldman and Mr Emre Caliskan.. This event will take place on Tuesday, 15 November at 19.00. The event will be held Committee Room 8 of the House of Commons. This lecture will be kindly chaired by Ms Ezgi Basaran. This event is kindly hosted by Rt Hon Joan Ryan MP.

Ezgi Başaran is a prominent journalist and a columnist in Turkey.  She started working in a news channel, NTV, while she was a freshman in Marmara University Journalism Department. After graduating, Ezgi became a junior reporter in 2004 for Hürriyet, a daily of the Doğan Group and Turkey’s most widely read newspaper. In 2010, Ezgi left Hürriyet for Radikal daily and was appointed managing editor of the paper’s news website Radikal.com.tr in 2011. In 2013, Ezgi became the editor-in-chief of Radikal. She is now an academic visitor at St. Antony’s College,University of Oxford, focusing on the Kurdish issue.

Dr. Simon A. Waldman is a Visiting Research Fellow in the Department of Middle Eastern Studies at King’s College London. He obtained his MA and PhD from the Institute of Middle Eastern Studies, KCL, having earlier read Politics and Sociology at Brunel University. Simon’s research focuses on international diplomacy towards the Middle East, statebuilding and leadership in the region, Turkish history and politics and the Arab-Israeli conflict from a historical perspective. He is the head of the Turkish Studies Research Group at King’s College London. Simon’s latest book isAnglo –American Diplomacy and the Palestinian Refugee Problem (Palgrave MacMillan), and he is the co-author of the forthcoming The New Turkey and its Discontents (Hurst and Oxford University Press, 2016).

Emre Çalışkan is reading for a DPhil in International Relations at St Antony’s College at the University of Oxford.  His dissertation explores the role of Turkish Islamic non-state actors in Turkey’s foreign policy making in Sub-Saharan Africa. His other interests include Turkey’s transnational Islam, Turkish foreign policy, and Islamic NGOs in International Relations. He holds an MA in Middle East and Mediterranean Studies from King’s College London and is the co-author of The ‘New Turkey’ and its Discontents (Hurst and Oxford University Press, 2016). A Turkish analyst and freelance journalist, Emre has worked for the BBC Turkish service, Cumhuriyet, Newsweek Turkey and the Turkish public broadcaster Türkiye Radyo Televizyon (TRT), as a foreign correspondent based in Ankara, Damascus, Beijing and London. His commentaries are picked up by Open Democracy, Al Monitor and Haaretz.