The season includes A Midsummer Night’s Dream, The Merry Wives of Windsor, Ben Jonson’s Bartholomew Fair, and the return of 2018’s As You Like It 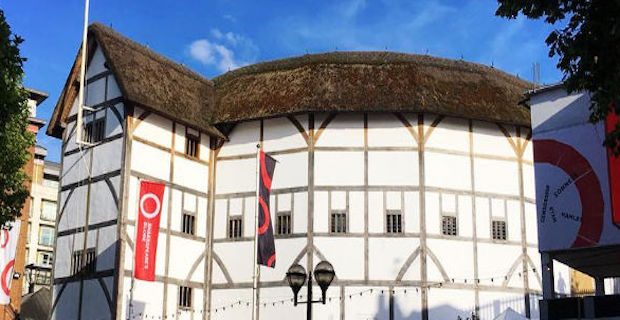 Shakespeare’s Globe is delighted to announce the Summer Season 2019. Celebrating and interrogating our ‘sceptred isle’ through Shakespeare’s history plays, a year-long journey begins with Richard II, opening 22 February in the Sam Wanamaker Playhouse, continuing into the Globe Theatre this summer with Henry IV Parts 1 and 2, and Henry V. The season also includes A Midsummer Night’s Dream, The Merry Wives of Windsor, Ben Jonson’s Bartholomew Fair, and the return of 2018’s As You Like It. Robin Hood tales will form the core of the Read Not Dead series this year, and festivals throughout the summer include Women & Power and Poland is Hamlet. This year’s Playing Shakespeare with Deutsche Bank production will be Romeo and Juliet, opening on 28 February, with 20,000 free tickets available to state secondary schools. The Shakespeare’s Globe Touring Ensemble will once again present a trio of plays for the audience to choose from: The Comedy of Errors, Pericles, and Twelfth Night.

The cast for Henry IV Parts 1 and 2, and Henry V will comprise the new resident Globe Ensemble, echoing the approach that Shakespeare’s company would have taken over 400 years ago. The Globe Ensemble includes Tayo Akinbode, Sarah Amankwah, Philip Arditti, Sarah Bedi, Nina Bowers, Jonathan Broadbent, Leaphia Darko, Steffan Donnelly, Federay Holmes, John Leader, Sophie Russell, Oliver Ryan, Helen Schlesinger, Michelle Terry, Rob Walker, Siân Williams, and Jessica Worrall. Sarah Bedi and Federay Holmes will direct, and Michelle Terry will play Hotspur in Henry IV Part 1. Michelle is currently playing Lady Macbeth in the critically-acclaimed Macbeth in the Sam Wanamaker Playhouse. Her other credits include the titular role in Hamlet, Adam and other characters in As You Like It (Globe, 2018), Cleansed (National Theatre), and Tribes (Royal Court), for which she won an Olivier Award for Best Supporting Actress. Helen Schlesinger will play Falstaff (Henry IV Part 1 & 2), and Sarah Amankwah will play Hal in Henry IV Parts 1 & 2, and the titular role in Henry V. Sarah is currently starring in Doctor Faustus in the Sam Wanamaker Playhouse. Sarah’s previous credits include Amadeus, The Threepenny Opera (National Theatre), Black Earth Rising(BBC/Netflix) and ITV’s hit drama series Marcella. Helen performed in Hamlet and As You Like It as part of the Globe Ensemble last summer. Helen’s other credits include Albion (Almeida), Coriolanus(Donmar Warehouse), The Crucible (RSC), The Hour, and Criminal Justice (BBC).

The Merry Wives of Windsor opens 17 May, directed by Nicole Charles and Elle While. The production will be broadcast live into cinemas on Thursday 20 June. Nicole Charles was most recently at the Globe, directing Emilia, which transfers to the West End from 8 March – 15 Junethis year. Her other credits include assistant directing at the Globe for The Taming of the Shrew(2016), directing Gluathione (Young Vic directors programme), assistant directing The Jungle (Young Vic), and The Goat or, Who is Sylvia? (Theatre Royal Haymarket). Elle While is an Associate Director of Elliott & Harper Productions. She most recently co-directed Hamlet and As You Like It (Globe, 2018), her other credits include The Curious Incident of the Dog in the Night-Time (2017/2018, UK and International tour; West End 2015-2017), Knock Knock (Roundhouse), and Glory Dazed (Soho Theatre/Adelaide Festival/Underbelly, Edinburgh), which was winner of a  Holden St. Theatre award and Critics’ Choice award.

Opening 28 June, A Midsummer Night’s Dream will be directed by Sean Holmes. Sean Holmes is Associate Artistic Director. He recently announced his departure from the Lyric Hammersmith after almost a decade as Artistic Director and Joint Chief Executive. Sean’s tenure at the Lyric included programming game-changing shows such as Three Kingdoms, directing 22 productions, including the Olivier Award-winning Blasted, the world-wide hit Ghost Stories, and the first stage version of Bugsy Malone in over a decade. He introduced Pantomime to the Lyric, and, through its ground-breaking work with young people, ensured the Lyric was accessible, welcoming and inclusive. His years of experience working with ensembles, such as Filter and the ground-breaking Secret Theatre project, will inform and inspire the Globe’s own ensemble experiment.

Opening 23 August, Bartholomew Fair, Ben Jonson’s raucous comedy on London life, will be directed by Blanche McIntyre. Blanche returns to the Globe, having most recently directed The Winter’s Tale (2018). She has previously directed The Comedy of Errors (2014) and As You Like It (2015) at the Globe. Winner of the 2011 Critics’ Circle Most Promising Newcomer Award for Accoladeand Foxfinder (Finborough Theatre), her other credits include The Writer (Almeida), and The Norman Conquests, a trilogy of plays by Alan Ayckbourn at Chichester Festival Theatre. She has also recently directed at the Donmar Warehouse, Nottingham Playhouse and the RSC.

Brendan O’Hea returns to direct Globe on Tour, where a company of eight actors will once again offer audiences around the world a trio of plays which this year explore the themes of refuge and displacement. Continuing last summer’s experiment, which revived the Shakespearean tradition of allowing audiences to vote for the play they’d like to see, this year’s audiences will cast their votes for The Comedy of Errors, Twelfth Night or Pericles, all stories of lost families, new homes, and what it means to belong. The tour will return to the Globe stage for Refugee Week (17 - 23 June) as part of a wider programme of events in which refugee artists, performers and audiences will all share their stories. A director, actor, and education practitioner, Brendan directed last year’s Globe on Tour, and has previously performed in a number of productions at Shakespeare’s Globe including Cymbeline (2015), Measure for Measure (2015) and A Midsummer Night’s Dream (2014). He is also directing Tom Stuart’s new play After Edward, opening in the Sam Wanamaker Playhouse on Thursday 21 March. Isabel Marr assistant directed last year’s tour alongside Brendan, and returns this year as Associate Director.

A day of panel discussions and workshops will take place on 9 March to mark the 400th anniversary of the death of Richard Burbage, the most famous actor to perform at the original Globe Theatre, and also marking 100 years since the birth of the founder of Shakespeare’s Globe, Sam Wanamaker. Read Not Dead performances will return between February and September, this year celebrating the most famous outlaw in English history, Robin Hood. Six early modern plays featuring Robin Hood will be revived in the Sam Wanamaker Playhouse, adhering to the usual Read Not Dead ground rules in which actors receive the play on Sunday morning and present it, script-in-hand, to an audience later in the afternoon. Robin Hood, Maid Marian and Friar Tuck will also reappear in the annual family festival, Shakespeare’s Telling Tales, taking place between 26 and 28 July to celebrate the joy of storytelling.

In May, Women & Power will comprise performances, panel events, a scholarly symposium and workshops to highlight the work and voices of women of all backgrounds. In light of movements such as #MeToo and #TimesUp, the festival will ask some of the most important questions of the moment, exploring how theatre, music, art and poetry can have a part to play in social change. Poland is Hamlet, a two-week festival commencing on 26 June, will celebrate Poland’s affinity and fascination with Shakespeare’s works. The festival will combine theatre, film, illustration and song, and will feature the remarkable Song of the Goat Theatre Company, with a rare opportunity to see their Songs of Lear. This year also marks the 150th anniversary of the birth of Polish playwright, director and painter Stanislaw Wyspiański, whose one-woman play Death of Ophelia will premiere in the Sam Wanamaker Playhouse, and whose seminal work Hamlet Study will be published in English for the first time.

2019’s series of scenes, sonnets and songs will see a return of Shakespeare Within the Abbey: All Places that the Eye of Heaven Visits, directed by Claire van Kampen. Claire van Kampen most recently directed Othello at the Globe, starring Mark Rylance and André Holland. In celebration of Shakespeare’s birthday, Mark Rylance will bring together a company of 22 actors in Westminster Abbey to roam amongst the audience performing fleeting extracts of drama, poetry and song. Shakespeare Walks: Sweet Love Remember’d will take place on the 20 and 21 April. Directed by Darren Raymond, Artistic Director of Intermission Theatre, the walks will include scenes and speeches woven over two hours through London, starting from either Westminster Abbey or the parish of Shoreditch, where the original Theatre was built in 1576.

This year’s Playing Shakespeare with Deutsche Bank production will be Romeo and Juliet, directed by Michael Oakley. Opening on 28 February, 20,000 free tickets are available to state secondary schools in London and Birmingham for this vivid production created especially for 11-18 year-olds. Michael Oakley returns to the Globe after directing last year’s Playing Shakespeare production of Much Ado About Nothing. He is also a recipient of the JMK Award for Young Directors. Michael’s other directing credits include William Wordsworth (ETT/Theatre by the Lake) and The Invisible (Bush Theatre).

The principal partner for the Summer Season 2019 will be Merian Global Investors.

Keywords:
Shakespeares Globe
Your comment has been forwarded to the administrator for approval.×
Warning! Will constitute a criminal offense, illegal, threatening, offensive, insulting and swearing, derogatory, defamatory, vulgar, pornographic, indecent, personality rights, damaging or similar nature in the nature of all kinds of financial content, legal, criminal and administrative responsibility for the content of the sender member / members are belong.
Related News