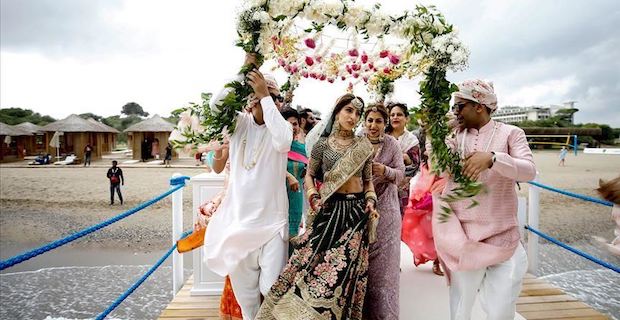 The demand for the Indian weddings in Turkey has been growing apace, said an official from the International MICE and Wedding Forum (IMWF) on Monday. IMWF Managing Partner Necip Fuat Ersoy told Anadolu Agency that India is the main market of wedding tourism in the world, adding that Turkey holds a small but growing share of it. Following the last year's IMWF event, the demand for destination weddings in Turkey rose eight times compared to the previous year, according to Ersoy. "The Indian weddings are a segment in Turkey with high added value," Ersoy said. Turkey has already hosted five big Indian wedding events since the beginning of 2019, he added.

Turkey experienced a “rather active” start for destination weddings and tourism events in 2019, and expects demands two or three times more compared to the last year, he stated.

"We want to complete this year with 20 Indian weddings."

Turkey has been intensely working to grasp the Indian market for the last five years, according to Ersoy

Marking the international forum as an important platform to introduce Turkish market to the world, he said Turkey registered a significant rise in sectoral demand after the 2018 forum.

The world turnover of MICE -- which is an acronym for Meetings, Incentives, Conferencing, Exhibitions -- sector exceeds $600 billion, while the destination wedding events turnover is over $300 billion, he also noted.

The four-day IMWF2019 event -- which began its annual conference Monday in the resort city of Antalya -- will be attended by a who’s who and decision makers in the sector from India, Dubai and the Community of Independent States countries, including Armenia, Azerbaijan, Belarus, Georgia, Kazakhstan, Kyrgyzstan, Moldova, Russia, Tajikistan, Turkmenistan, Ukraine, and Uzbekistan.

The IMWF 2019 is organized with the support of the Turkish Ministry of Industry and Technology, partnership of Turkish Airlines and coordination of the IMWF and Western Mediterranean Development Agency.

Keywords:
Indian WeddingsIndian Weddings Turkey
Your comment has been forwarded to the administrator for approval.×
Warning! Will constitute a criminal offense, illegal, threatening, offensive, insulting and swearing, derogatory, defamatory, vulgar, pornographic, indecent, personality rights, damaging or similar nature in the nature of all kinds of financial content, legal, criminal and administrative responsibility for the content of the sender member / members are belong.
Related News