Celebrating the UK and India Special Relationship ‐ Winners unveiled at The Indian Awards 2018 held in the Houses of Parliament. Here is the winners 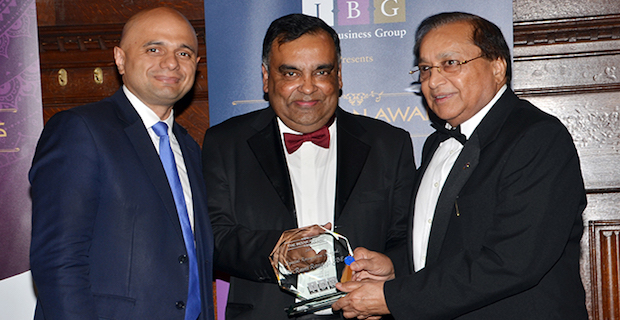 The Awards were founded by Amarjit Singh, Chief Executive Officer of the India Business Group (IBG), an established thought leader on UK ‐ India business affairs and Special Advisor for India to the University of Southampton.

The UK Home Secretary, Rt Hon Sajid Javid MP said:
“As Home Secretary, I am delighted to be able to attend the 2018 Indian Awards ceremony, which recognises outstanding contributions to the UK-­‐India relationship. The UK is one of the world’s oldest democracies, and India the largest. Our collaboration is a force for good – our shared values magnified by the ‘living bridge’ formed of a breadth of personal, professional, cultural and institutional ties. With so much in common, it’s only natural that Britain and India continue working together to make our people, and the world, safer and more prosperous”.

H.E. Mr Y.K. Sinha, The High Commissioner of India said:
“Commencing last year, The Indian Awards recognises and celebrates the outstanding work done by individuals, businesses and organisations in the UK, who have contributed to strengthening the UK ‐India partnership in recent years. I had the pleasure of presenting the Special Recognition Award to the former Prime Minister David Cameron last year. I would like to extend my best wishes for the second edition of these Awards.”

Following last month’s successful UK visit of Prime Minister Narendra Modi, the gala invitation ‐only dinner and ceremony featured senior business leaders, Government officials, opinion formers and prominent members of the Indian community and guests from India and other parts of the World. Nominations were invited by members of the public and the handful of winners were chosen by a panel of esteemed judges and announced on the evening.

The UK’s International Trade Secretary, The Rt Hon Dr Liam Fox MP said:
“India is the world’s seventh-­‐largest economy and the fourth largest investor into the UK, while UK investment in India grew by 8.8% in the year to 2016. As an international economic department, the Department for International Trade continues to work closely with our Indian colleagues to maximise trade between our nations and I welcome this fantastic initiative, celebrating the historic trading ties between the UK and India.”

The esteemed judging panel was made of up senior figures, including: Lord Patel of Bradford OBE, Chair of IBG, Virendra Sharma MP, Chair of the Indo-­‐British APPG, Baroness Prashar CBE, Deputy Chair of the British Council, Rajiv Luthra, Founder and Managing Partner of Luthra & Luthra Law Advocates, Dr Catherine Raines, Former Director General of Department for International Trade, and Alan Fitzwater, Director of Regional Engagement at the Institute of Directors.

The Rt Hon Mark Field MP, FCO Minister of State for Asia said:
“As the Minister for Asia, I am delighted that the Indian Awards ceremony is happening again this year to recognise outstanding contributions to the UK-­‐India relationship. While there is plenty in our shared culture that binds us closely together, what excites me is the relationship we can forge for the future, in technology, in tackling the many global challenges we face. Working together, the UK and India can be a powerful force for good in the world.”

On receiving the award, Dr Ranger said: “It is a great honour to receive this special recognition award from the India Business Group. I am grateful to the judges who considered me worthy of this accolade. I am privileged to receive the award as last year the same recognition was bestowed upon my hero, the Former Prime Minster of the UK, The Rt. Hon. David Cameron. This award also represents India’s emerging stature and standing in the world as a positive economic and political force. The partnership between India and Britain is based on similar values and as a result, it will go from strength to strength”.

“The India Business Group is delighted to present the second Indian Awards initiative,” says Mr Singh. “The modern relationship between the UK and India is at a key juncture. Through The Indian Awards, we aim to inspire and encourage the next generation of UK and Indian entrepreneurs, facilitators and bridge builders who will take the bilateral relationship to greater heights.”

Professor, The Lord Patel of Bradford OBE, Chairman of India Business Group said:
“This special initiative celebrates, for the first time, the efforts of outstanding organisations and individuals (based in the UK) who have worked over the years to strengthen the bond between the UK and India. This influential awards ceremony is a timely reminder about the mutually beneficial, evolving and special relationship between our two great nations.”

Lord Deighton KBE, Chairman of Heathrow Airport, one of the partner organisations for the awards said:
“Heathrow is the UK’s gateway to India with more connections to the country than any other UK airport. It plays a key role in maintaining Britain’s links to India with flights to six destinations, carrying 2.5 million passengers and more than 127,000 metric tonnes of cargo to and from the country via Heathrow last year alone. We’re proud to be attending the India Business Group Awards, recognising the groups and individuals who have contributed to strengthening the UK-­‐India partnership. Having recently received India’s Prime Minister, Narendra Modi, ahead of the Commonwealth Heads of Government meeting in April, we understand the important role that India plays in the UK’s economy and are working to see that grow.”

Virendra Sharma MP, Chair of the Indo ‐ British APPG “The Indian Awards is an important UK wide initiative for recognising entrepreneurs, inspirational people and organisations that have championed international cooperation between the UK and India. This is an opportune moment to celebrate the dynamic UK-­‐India partnership”.

Stephen Martin, Director General of the Institute of Directors, one of the partner organisations for the awards said:
“The IoD is delighted to have participated in The Indian Awards, particularly at a time when the UK needs to turn its idea of “Global Britain” into a tangible reality. Growing business and trade links between our two countries is essential as we prepare to exit the European Union.”

Keywords:
UK And IndiaThe Indian Awards 2018Indian Awards 2018
Your comment has been forwarded to the administrator for approval.×
Warning! Will constitute a criminal offense, illegal, threatening, offensive, insulting and swearing, derogatory, defamatory, vulgar, pornographic, indecent, personality rights, damaging or similar nature in the nature of all kinds of financial content, legal, criminal and administrative responsibility for the content of the sender member / members are belong.
Related News