Manufacturing production was down 1% in April, compared to the previous month, but it was up 0.5% on an annual basis. 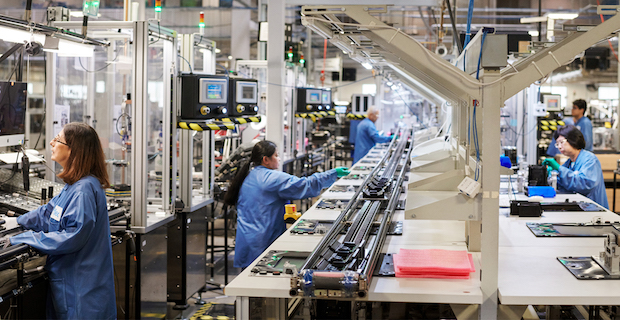 The UK's manufacturing output fell for the third consecutive month in April, according to official data released on Monday. Manufacturing production was down 1% in April, compared to the previous month, but it was up 0.5% on an annual basis, said the Office for National Statistics (ONS). While the market estimate for manufacturing output was a 0.2% increase on a monthly basis, it was expected to gain 1.8% from April 2021. Eight out of 13 sub-sectors saw contraction in April, the British statistical institute said in a statement. "The largest falls were in the other manufacturing and repair sub-sector, down 4.2%, which saw falls in all five industries in April 2020," the ONS said. "There was also a fall of 4.6% in the manufacture of computer, electronic and optical production, with widespread weakness seen in this sub-sector," it added. Industrial production in the UK also fell in April by contracting 0.6% from the previous month, coming against the market estimate of a 0.2% increase. On an annual basis, industrial output rose 0.7% in April, also coming lower than the market estimate of a 1.7% increase.

Keywords:
UK Manufacturing OutputUK
Your comment has been forwarded to the administrator for approval.×
Warning! Will constitute a criminal offense, illegal, threatening, offensive, insulting and swearing, derogatory, defamatory, vulgar, pornographic, indecent, personality rights, damaging or similar nature in the nature of all kinds of financial content, legal, criminal and administrative responsibility for the content of the sender member / members are belong.
Related News