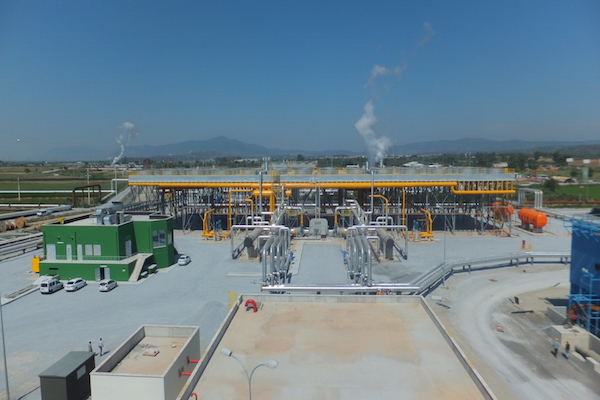 The Efeler geothermal plant is being built by a subsidiary of Güriş Holding, a leading Turkish renewable energy company. The plant’s five units – three of them already operational – are situated near the western town of Germencik, in the Buyuk Menderes Graben, the area in Turkey with the greatest potential for geothermal energy.

The EBRD has played a key role in securing 15-year financing for the project. The Bank is providing a US$ 200 million loan, alongside additional loans of US$ 325 million from Türkiye İş Bankası AŞ (İşbank), US$ 130 million from Turkiye Sınai Kalkınma Bankası A.S. (TSKB) and US$ 65 million from the Black Sea Trade and Development Bank (BSTDB).

When completed later this year, the plant will reach 170 MW capacity, making it one of the ten largest geothermal plants in the world.

It will also increase the amount of installed geothermal capacity in Turkey by about 30 per cent, a substantial contribution to reaching the country’s 2023 renewable energy targets.

The geothermal potential in the country is estimated at around 4 GW, of which only 427 MW has been developed to date.

Nandita Parshad, Director for Power and Energy at EBRD, said: “We are pleased to partner Güriş Holding and to play a substantial role in the financing and completion of such a landmark project. At the EBRD we are strong supporters of geothermal sources of energy as a way forward for Turkey’s energy mix. Geothermal technology combines high efficiency with renewable energy and can also serve to satisfy baseload demand. If the country realised all of its potential of 4GW geothermal, it would be equal to adding a further 12-15 GW of wind or solar power.”

Musfik Hami Yamanturk, the CEO of the Güriş Holding added: “We are happy and proud to raise this financing from such an esteemed lending consortium. With this support, all the units of the Efeler geothermal plant will be operational by the end of this year, which will increase Güriş Holding’s total renewable capacity to over 435 MW. We believe in the importance of using renewable resources and will reach a renewable portfolio of 1150 MW by the end of 2018 when all projects that are currently under construction will become operational.”

Previously the EBRD has financed four geothermal projects through Turkish commercial banks. The Bank is also planning to provide finance and advice for companies that are just starting to invest in geothermal energy, helping them to minimise their exploratory, drilling, technical and financial risks.

Investing in sustainable energy is a strategic priority for the EBRD in Turkey, as the country is working to meet growing demand for electricity and to diversify away from expensive imported fuel. Almost half of the Bank's total portfolio in Turkey is in sustainable energy and since 2009 the EBRD has invested €2.2 billion in 58 such projects, including two of the country’s largest wind farms.

The EBRD started investing in Turkey in 2009 and currently operates from offices in Istanbul, Ankara and Gaziantep.

In just six years the Bank has invested over €5.5 billion in Turkey through more than 150 projects in infrastructure, energy, agribusiness, industry and finance. It has also mobilised over €12 billion for these ventures from other sources of financing.

In 2014 Turkey became the leading recipient country of the EBRD, with new investments worth €1.4 billion.