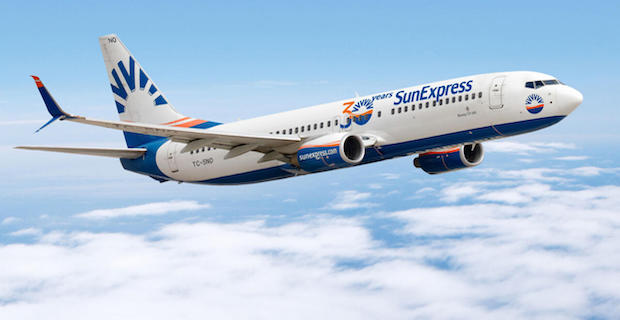 The move follows last week’s decision by Germany to lift travel warnings for the Turkish resort cities of Antalya, Izmir, Mugla (including Fethiye), and Aydin. The move came as Turkish resorts and destinations nationwide implemented a “safe tourism” certification program to ensure visitors are kept safe from coronavirus.

SunExpress is currently operating direct scheduled flights from 14 cities in Turkey to 29 cities in Europe.

The carrier is also boosting the number of flights to London, Paris, Vienna, and other European destinations, the statement said.

Based in sunny Antalya on the Turkish Mediterranean, SunExpress was founded in 1989 as a joint venture of Turkish Airlines and Germany's Lufthansa.

Keywords:
SunExpressTourismTravel Warning
Your comment has been forwarded to the administrator for approval.×
Warning! Will constitute a criminal offense, illegal, threatening, offensive, insulting and swearing, derogatory, defamatory, vulgar, pornographic, indecent, personality rights, damaging or similar nature in the nature of all kinds of financial content, legal, criminal and administrative responsibility for the content of the sender member / members are belong.
Related News