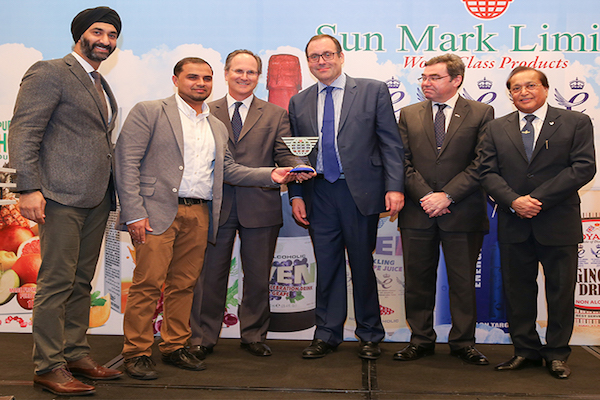 Sun Mark held its annual Celebration Dinner in Dubai during the Gulfood exhibition at the lavish Conrad Hotel on 22nd February 2016. It was, as always, a glittering affair with esteemed guests from the Middle East and South Asian region but with many flying in from as far away as Canada, Malaysia and South Africa with the array of guests resembling a gathering of the United Nations. Sun Mark is the only British company to have been awarded the Queens Award for Enterprise in International Trade for 5 consecutive years and is currently engaged in sales in over 120 countries and its reputation extends far and wide; so much so in fact that the Guests of Honour were the British Ambassador to the UAE, His Excellency Mr Philip Parham CMD, and Mr Richard Harrington MP, Minister from the Home Office. The list of dignitaries also extended to Mr Paul Fox, Her Majesty’s Consul General to Dubai.

The evening began with Mr. Harmeet Ahuja, Director of Sun Mark, welcoming the guests before showing a video of the developments at Sun Mark and the wider business group over the last year. The video showed how the group has ventured into the hotels and hospitality sector to add to its commercial property, marketing and distribution and freight forwarding businesses. The video told the audience of the continued acknowledgement of Dr. Ranger’s successes through his receipt of numerous accolades over the last year, his integral role in the UK visit of the Indian Prime Minister, Mr. Narendra Modi, and his continued support for education and entrepreneurial development. The video showed how the highlight of 2015 was when the company’s Chairman and Founder, Dr. Rami Ranger, had been recognised by Her Majesty The Queen for his continued efforts and achievements in business and community service by awarding him the title of CBE, in full, “Commander of The Most Excellent Order of the British Empire”. This is now the eighth time that Dr. Ranger has been recognised by Her Majesty the Queen and an achievement of which both he and all who know him are rightfully proud.

Dr. Ranger, in his speech, paid tribute to all those who worked closely with him and how the success of Sun Mark is a result of a combination of customers, and suppliers and other service providers coming together to help each other to progress. He thanked his team from Sun Mark for all of their efforts and particularly Mr. Mohan Khurana who he described as the architect of the company and who had given him the idea of starting Sun Mark. He reminded his guests that with the right values anyone can succeed and told his own story and how it can inspire anyone to do the best they can.

Mr. Paul Fox, British Consul General to Dubai, addressed the guests and paid tribute to Sun Mark’s role in international trade and strengthening relations between countries in the region. Mr. Richard Harrington MP, addressed the guests and read out a letter which had been sent by the Prime Minister of the United Kingdom, The Rt. Honourable David Cameron MP, in which he acknowledged the success of Dr. Rami Ranger, Sun Mark and its role in exporting British products around the world and how his government encouraged British companies to export products all over the world and that Rami Ranger and Sun Mark were leaders in this field.

Sun Mark then recognised some of its regional partners and distributors in the region who had made a significant contribution to the growth and development of business in the region. They were Mr. Ismail Mohammed of Golden Rose Foodstuff LLC, of the UAE; Mr. Abdlhafiz of Mohammed Kedir Distribution from Ethiopia; Mr. Khalil Issa and Mr. Ali Issa of Al Mahasen Trading LLC in the UAE, Mr. Tikam Sawlani of Ishwari & Sons of Sierra Leone and Mr. Faisal Suleman of SMS Foodstuff from Pakistan.

The guests were then addressed by His Excellency Philip Parham who spoke of the importance of trade and reiterated its importance in forging improved relations across the world. He also acknowledged Dr. Ranger’s philanthropic efforts and achievements. He spoke of the British food industry being a major employer in the UK and an unsung hero of the British economy. He encouraged British companies to work in the UAE and to use it as a base to grow their business further.

The Vote of Thanks was given by Dr. Ravi Gidar, who thanked Dr. Rami Ranger and his team for making the evening possible and for bringing together such a myriad of people from all over the world. He encouraged everyone to read Rami’s book as it was full of great advice and that he referred to Rami as a legend and had great wisdom which he shared with everyone and had a way of connecting with people of all ages and from all walks of life.

The formal part of the evening was then concluded and dinner was served.