Raminder Singh Ranger, chairman of Sun Mark Ltd, was yesterday awarded the Commander of the Most Excellent Order of the British Empire (CBE) 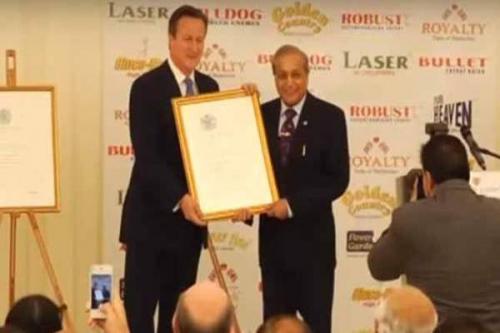 Raminder Singh Ranger, chairman of Sun Mark Ltd, was yesterday awarded the Commander of the Most Excellent Order of the British Empire (CBE). Popularly known as Rami Ranger in London circles, the businessman has won the Queen’s Enterprise awards for five consecutive years in the past. He authored ‘From Nothing to Everything’, which charts his rags to riches story from his birth in Gujranwala, in modern day Pakistan, before his family made the journey to India during Partition. Beginning with a dramatic flight from home during the turmoil of partition of India in 1947, the journey takes in the assassination of his father, childhood hardship under the guiding hand of his mother, emigration to England and the long fight against prejudice to achieve success on a scale he could hardly have imagined as a naive young immigrant in London in 1971, the book description reads.

Having founded his first enterprise with just 2 pounds and a typewriter in 1987, Rami Ranger now oversees Sun Mark and sister firm Sea Air and Land Forwarding Ltd, a 160-million- pound-a-year FMCG operation.“My story shows that one does not need a rich father, an elite education or the old schoolboy network to help one in life. What one needs is self-respect, ethics, commitment and empathy for others,” Ranger says in the book. Ranger is also chairman of the British-Sikh Association and patron of Princes Charles’ charity, Prince’s Trust, and the Gandhi Statue Memorial Trust, formed to raise funds for the Mahatma Gandhi statue at Parliament Square unveiled last year. He also donated 250,000 pounds to the London Southbank University to help graduates engage with business. His CBE follows an MBE from the Queen back in 2005. (24indianews.com)