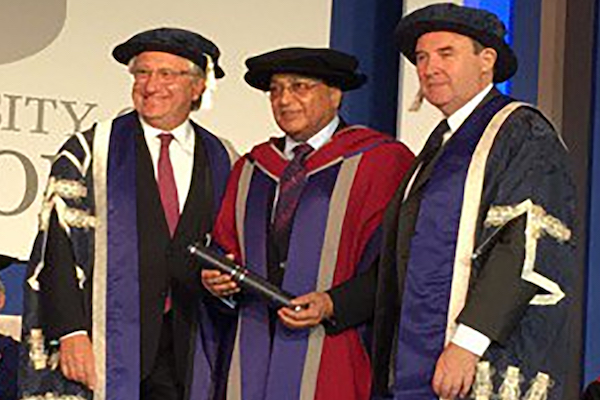 Rami Ranger CBE received an honorary doctorate from the University of West London at their annual graduation ceremony held in the iconic grounds of Wembley Stadium on 21st July 2016. He was given this honour in recognition of his services to business, philanthropy and promotion of social cohesion in Britain.

The doctorate was conferred upon him by the chancellor Mr Laurence Geller CBE and Vice Chancellor, Professor Peter John.

The citation was read by the Director of Development and Alumni relations, Ms Luna Sidhu and it read:

“Mr Raminder Ranger CBE, known to all as Rami, is a man who has defied great odds to achieve outstanding success in business and beyond. Rami’s life began in a refugee camp in newly partitioned India. His father, a prominent anti-partition campaigner, was assassinated during the partition. His mother managed to flee and was left with the daunting task of raising 8 children in a country that had witnessed one of the biggest migrations in modern history. Life was not easy and while his mother worked tirelessly they were desperately poor.

Unable to join the army as his brothers had done, Rami came to the UK in search of a better life. The initial few months were very hard but he did not give up. He found work as a chef in KFC but soon his work ethic and commitment got noticed and he began to rise quickly through the ranks to become District Manager for the chain. He continued in corporate roles for other large organisations including McCain and Dixons. Though these roles gave him useful operational and management knowledge, his entrepreneurial spirit led him to start his own freight forwarding business from a shed in Hayes with just £2 of capital.

Always a perfectionist and keen to ensure that his customers got the best possible service his freight forwarding business, Sea Air and Land Forwarding, quickly flourished. From there he entered the world of international distribution in the fast moving consumer goods sector and started supplying companies in emerging markets with high quality British food and beverage products through his second company Sun Mark. Sun Mark, went on to become an even greater success and eventually achieved the unique distinction of winning five consecutive Queens Awards for Enterprise in International Trade. Today his companies have revenues in excess of £200 million and employ over 100 people.

His business skills have been recognised through the conferment of numerous awards such as the Institute of Export (IOE) Award 2013, Institute of Directors Award in 2014 and a Lifetime Achievement award by the Family Business Place to name just a few.

Alongside building a very successful business, Rami has never shied from giving back to his community and his adopted country. Following the 7/7 bombings he set up an inter-faith forum to build bridges between the different communities. He is active in the world of politics; encouraging major political parties to engage with the various ethnic communities that make-up modern day Britain in order to build a more cohesive society. He supports a number of charities from the Princes’ Trust to Cancer Research UK and various educational institutions including the University of West London.

Despite his enormous success he remains down-to-earth, accessible and passionate about equality of opportunity for all.

Chancellor, Vice-Chancellor I have great pleasure in presenting to you for the award of Honorary Doctor of Letters - Mr Rami Ranger CBE“

Dr Ranger expressed his appreciation to the university for recognising him and his efforts and shared his experience with the graduates that his success in life was primarily down to the role of his mother in his upbringing and how she had battled successfully against all odds and five principles around which all of his activities revolve: self-respect, good work ethics, commitment, vision and empathy for others. He urged all those present to implement these in their daily lives and that they would hold all in good stead throughout their lives.