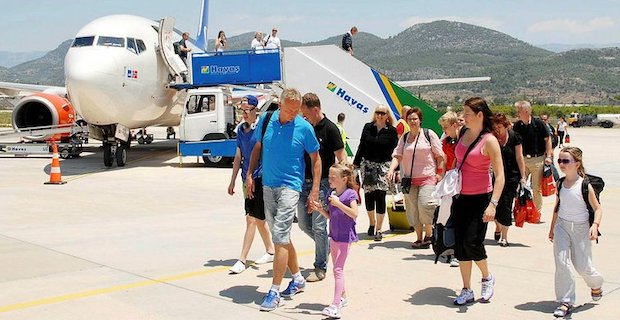 Turkey hosted more than 3.2 million foreigners during the first two months of this year, the Culture and Tourism Ministry announced Friday.

Istanbul, Turkey's largest city by population and a top tourist destination, attracted nearly 59 percent of all visitors -- 984,689 -- in the January-February period of the year.

The northwestern province of Edirne, which borders both Bulgaria and Greece, welcomed the second-highest number of foreigners -- over 203,498 -- in the same period.

It was followed by Turkey's Mediterranean resort city of Antalya with over 135,000 foreign visitors.

Bulgarians made up almost 8.55 percent of foreign visitors, followed by German citizens at 7.34 percent and Georgians at 7.25 percent.

Official data also showed air travel was the most popular way for foreign visitors to reach Turkey, with 2.3 million foreign travelers flying in, while over 850,000 used roads.

Keywords:
Turkey Culture And Tourism Ministry
Your comment has been forwarded to the administrator for approval.×
Warning! Will constitute a criminal offense, illegal, threatening, offensive, insulting and swearing, derogatory, defamatory, vulgar, pornographic, indecent, personality rights, damaging or similar nature in the nature of all kinds of financial content, legal, criminal and administrative responsibility for the content of the sender member / members are belong.
Related News