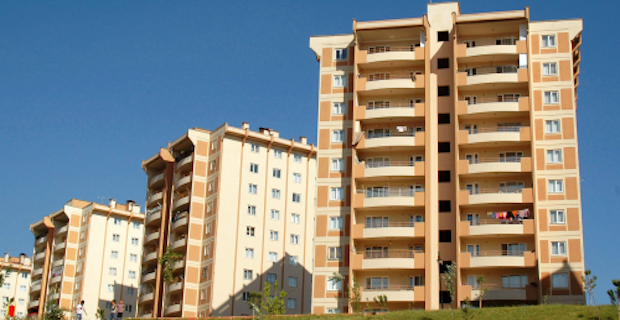 Turkey saw a 24.8 percent fall in house sales in January with a monthly total of 72,937 houses sold, the country's statistical office announced Monday.

"Istanbul had the highest share of house sales with 18.4 percent and 13,455 sold houses," the statistical institute said.

The capital Ankara and the Aegean province of Izmir followed Istanbul with 6,785 and 3,795 house sales, respectively.

Official figures showed that mortgaged house sales across the country had fallen to 6,537, down 77.2 percent on a yearly basis.

TurkStat noted that mortgaged sales represented 9 percent of all house sales in during the month.

Last year, over 1.37 million property sales were recorded in Turkey, while around 650,000 of them were newly-built houses.

Sales to foreigners up 81.9 percent

TurkStat said Istanbul was the most preferred city with 1,361 sales -- followed by the Mediterranean resort city of Antalya with 601 sales.

Iraqis purchased the most houses in January, buying a total 605 properties.

These were followed by Iranians with 305 purchases, as well as Russian, Afghan and Jordanian nationals making 195, 191 and 151 purchases each, the institute said.

TurkStat will release its next property sales report on March 18.

Keywords:
Houses In Turkey
Your comment has been forwarded to the administrator for approval.×
Warning! Will constitute a criminal offense, illegal, threatening, offensive, insulting and swearing, derogatory, defamatory, vulgar, pornographic, indecent, personality rights, damaging or similar nature in the nature of all kinds of financial content, legal, criminal and administrative responsibility for the content of the sender member / members are belong.
Related News