Long queues as shops reopen in England after lockdown

Pent-up demand has prompted queues at some shops as rules are relaxed in England after a three month lockdown. 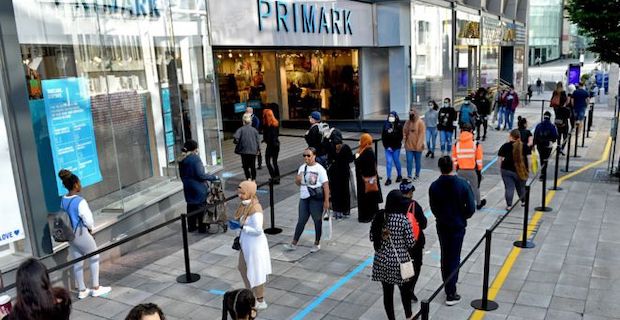 Long queues were reported outside Primark shops in London and Birmingham ahead of their 8am opening time. The chain, which like other clothing shops has been closed since 23 March, does not offer online shopping meaning customers can only buy in the store. All shops in England are allowed to open, although retailers have had to introduce strict safety measures. Jaydee Darrock, from Warwickshire, was one of the first inside Primark's Birmingham store after queuing from about 07:00. She described it as "surprisingly calm".

"We thought it would be chaotic, it's not, it's quite nice," she said.

In Manchester, people waited for almost an hour for some shops. Big queues formed outside Primark,TK Maxx and Foot Locker.

Although food shops, pharmacies, banks and other essential retailers have stayed open, vast swathes of the High Street, from bookshops to clothes outlets, have been closed since 23 March.

HMV owner Doug Putman told the BBC's Today programme that he expected a rush in the first week of trading after his shops open their doors. But he said retailers could be faced with a problem if shoppers do not return in the same numbers as before the lockdown.

"If you've got the same cost structure to run the business but sales are down even 20% it makes a lot of companies unviable."

"We're being very hesitant, we believe that it is going to be a tough year."

Retailers are required to introduce plastic screens at the tills and floor markings to keep shoppers two metres (6ft 5ins) apart - measures that are already a regular fixture in supermarkets.

Other measures will include pleas not to touch items unless customers intend to purchase them and decontaminating shopping baskets after each use. Retailers are promising there will be plenty of sanitiser on hand for customers. Toilets will remain closed in Primark's shops but facilities in other stores, including John Lewis and Selfridges, will be open.

In most clothes shops, fitting rooms will be closed. Bookshops including Waterstones intend to put items in quarantine if browsed but not bought, while some jewellers are introducing ultraviolet boxes that can decontaminate items in minutes.

Keywords:
Social DistancingCoronavirus Lockdown MeasuresCompaniesCoronavirus PandemicUK EconomyRetailingUK High Streets
Your comment has been forwarded to the administrator for approval.×
Warning! Will constitute a criminal offense, illegal, threatening, offensive, insulting and swearing, derogatory, defamatory, vulgar, pornographic, indecent, personality rights, damaging or similar nature in the nature of all kinds of financial content, legal, criminal and administrative responsibility for the content of the sender member / members are belong.
Related News