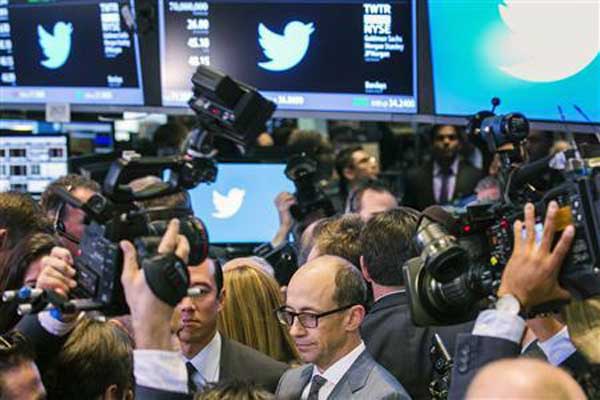 About a dozen private companies are valued at more than $1 billion, and many of them have already been holding informal talks with bankers. Now, many - including Box, Square and Airbnb - are likely to accelerate their IPO plans, according to venture capitalists. File-sharing company Box picked Morgan Stanley, Credit Suisse and JP Morgan to lead its IPO, Reuters reported Friday. The company has been valued at more than $1.2 billion by private venture capital investors, but it remains unclear whether it is profitable. Twitter's lack of profits proved to be no obstacle to the micro-blogging site raising as much as $2.1 billion in its IPO. Its current share price of around $41 gives it a market value north of $22 billion. That opens the door for other big-name private companies including Square, the payments company founded by Twitter co-founder Jack Dorsey, which has begun exploring the possibility of an IPO next year, according to the Wall Street Journal. Profits are not expected until 2015. Square declined to comment. Airbnb, an accommodation service, is also often cited as a potential IPO candidate. "They don't have inventory and have pretty low overhead," said analyst Michael Pachter, who believes the company is profitable. The company declined to comment. At Dropbox, a file-sharing service, Chief Executive Drew Houston said in September that his company, valued at $4 billion, has cash left from a recent fundraising round and is in no hurry to hold an IPO.

"I'm sure we'll go public at some point, but fortunately it's not something we have to think about right now," Houston said at a Techcrunch conference.

Social media service Pinterest, meanwhile, raised $225 million at a $3.8 billion valuation in October even though it had only begun to make money in September by showing ads. Chief Executive Ben Silbermann has consistently denied that the company is considering an IPO.

Jeremy Liew, a partner at Lightspeed Venture Partners, which invested in photo-messaging application Snapchat, said Twitter was the latest company to prove to investors that social media services can eventually turn their mass audiences into reliable revenue sources, even if they have yet to turn a profit.

Snapchat is perhaps one of the furthest down the line. It raised $60 million earlier this year at a valuation of $800 million. A Pew Research Center study released last month said that 9 percent of U.S. mobile phone users use Snapchat.

Notetaking service Evernote, which has been valued at $1 billion, has signaled for several months that it is beginning to mull an IPO, although CEO Phil Libin said an offering would still be at least two years away.

"There is no scenario in which we go public this year or next year," said Libin, noting that the company would probably raise more money in the private market before floating shares.

"I don't think we're at a point yet where we are the best company we can be to go public," he said in an interview, noting that predictable and balanced revenue streams would have to be precursors to any IPO.

The company, which has more than 80 million users and generates revenue from selling a $5 a month premium version of its app as well as a version for businesses, is "educating" itself about how to become IPO-ready by talking to bankers and other CEOs, including Twitter's Dick Costolo and Microsoft's Steve Ballmer, said Libin.

The market's embrace of Twitter comes right as the IPO market enters what is typically a seasonal lull. Public offerings typically come to a halt around the time of the Thanksgiving holiday and do not really get started again until February or March.

Kevin Hartz, a serial entrepreneur and investor who founded Xoom, a digital money transfer service that went public in February, said many in Silicon Valley believe the appetite is growing for tech IPOs.

"The question entrepreneurs ask is where can you get inexpensive capital?" Hartz said. "For years private valuations were higher than public valuations. But over the past couple quarters that disparity has changed."

Google Ventures partner Wesley Chan said the Twitter IPO shows that there is an appetite for exciting consumer Web companies which may not have fully developed business fundamentals.

That may prompt other similar companies to try to rush to market to take advantage of the current climate, though he noted that is not something he would advise his companies to do. "You never want to be in a situation where the market rewards you based only on momentum," he said.