Passengers have been advised not to travel on trains unless necessary during strikes next week, with only a fifth of services due to run. 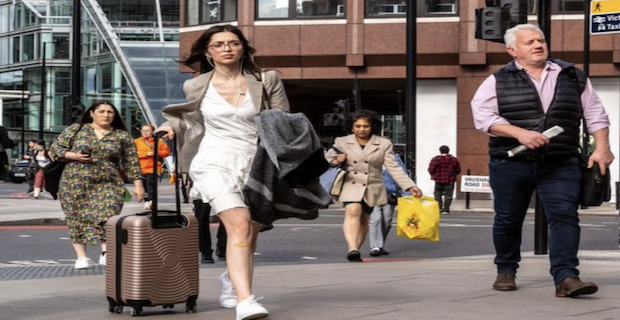 Network Rail said about half of all rail lines will be closed when thousands of workers walk out across the UK on 21, 23 and 25 June.The services that run will start and finish earlier, from 07:30 to 18:30.There will be no trains at all in many places including north from Glasgow or Edinburgh and to Penzance in Cornwall.Network Rail, which owns and maintains the country's railways, said there would also be no passenger services to locations including Bournemouth in Dorset, Swansea in south Wales, Holyhead in north Wales, Chester in Cheshire and Blackpool in Lancashire.Open lines include the West Coast Main Line from London to Scotland via locations such as Birmingham and Manchester.However, with trains running for shorter hours on strike days, final departures will be much earlier than usual. For example, the last train from Manchester to London will leave at 14:47 and the last from Norwich to London at 16:00, with the last train from London to Edinburgh at 15:00.

Are UK travellers heading for a summer of misery?

The timetable from 20 June to 26 June is still being finalised, but the number of services is expected to be around 4,500 compared with 20,000 normally, Network Rail said.Disruption is also expected to carry over into non-strike days during the week, when only about 60% of services are expected to run.This is due to not enough staff being on shift overnight to get services ready for the following day.Several train operators including Southeastern, TransPennine and Avanti West Coast have urged passengers to only travel by rail if necessary, while Northern has asked people "not to travel" on trains between Tuesday and Sunday.

Keywords:
Network RailGlasgow Or EdinburghUK Travellers
Your comment has been forwarded to the administrator for approval.×
Warning! Will constitute a criminal offense, illegal, threatening, offensive, insulting and swearing, derogatory, defamatory, vulgar, pornographic, indecent, personality rights, damaging or similar nature in the nature of all kinds of financial content, legal, criminal and administrative responsibility for the content of the sender member / members are belong.
Related News