DSEI 2013 opens having already broken a series of records

DSEI 2013 opens having already broken a series of records. 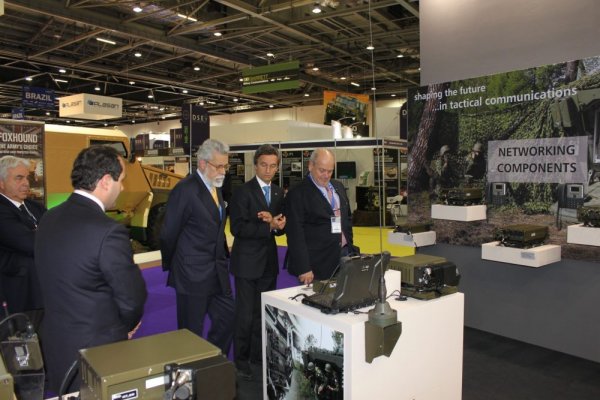 Defence & Security Equipment International DSEI 2013 opens having already broken a series of records. For the first time the number of exhibitors has reached the 1,500 mark, including a record 40 international pavilions. This year the show will feature: 6 themed zones this year, each featuring a dedicated seminar & briefing programme; the inaugural Medical & Disaster Relief Zone; and the largest ever number of visiting warships moored in the dock adjoining the exhibition halls.

The organisers, Clarion Events, are expecting in the region of 30,000 visitors from around the world. Among the senior military and political figures attending will be UK Government ministers and the Chiefs of the Army, Royal Air Force and Royal Navy.

Visitors will also be able to see the largest ever Land Zone, featuring such leading players as Daimler, General Dynamics, Iveco, Jankel Armouring, JCB, Land Rover, Nexter, Patria, Rheinmetall, Streit Group and Supacat, together with a diversity of niche specialist suppliers. The vehicle display area has also been expanded to meet the demand from manufacturers wanting to display their latest technologies.

The global significance of DSEI is highlighted by the presence of two ships from the Republic of Korea's Navy, which has included the show in its world tour to mark 60 years since the cessation of hostilities with North Korea. The impressive array of vessels will also include HMS Sutherland a Type 23 frigate and HMS Tyne a River Class offshore patrol vessel, together with ships representing the navies of Germany, the Netherlands and Sweden.

The scenario for this year's daily waterborne capability demonstrations is focused on peacekeeping, providing situational awareness and supporting larger naval forces involved in keeping sea lanes open and secure. A fascinating variety of naval boats, craft and UAVs will be participating in what is always one of the most compelling features of DSEI.

The air power dimension of DSEI is also very visible, with Wildcat and Merlin Mk II helicopters on display, together with a Spitfire and Eurofighter Typhoon, while prime contractors presenting their capabilities include BAE Systems, GE Aviation, Raytheon and Rolls-Royce.

Security is now firmly established as the fourth pillar of DSEI, alongside air, land and maritime. The Security Zone, introduced at the last DSEI in 2011, has been expanded (it is now 5 times larger) to accommodate an influx of exhibitors and new features including a cyber security pavilion. In recognition of this significant expansion, the area has been rebranded as the Security & Special Forces Zone and will showcase a comprehensive range of security solutions; from advanced software analytical tools to protect against fraud, to access equipment for Special Forces operations.

The increasing importance of unmanned systems is reflected in a significantly larger Unmanned Systems Showcase. Developed in association with the Association for Unmanned Vehicle Systems International the Showcase will stage daily demonstrations of troops reacting to differing threats, using unmanned systems to respond and control the situation.

Each dedicated zone has its own theatre hosting a programme of seminars that will run throughout the show. Friday sees the final judging of the DSEI Innovation Challenge and the Rising Stars reception when DSEI is offering free admission to apprentices and trainees from the military and the defence industry who will have the opportunity to network with senior naval, land and air military personnel as well as leading industry stakeholders.

DSEI Event Director Duncan Reid said, "While maintaining its focus on the traditional land, sea and air disciplines, DSEI is constantly evolving, for example showcasing cyber warfare and the latest advances in medical technology. Companies from the world's established and emerging markets have filled the halls, setting the scene for the best ever DSEI".