Restaurant and bar bosses will be banned from snatching workers’ tips, Theresa May announces 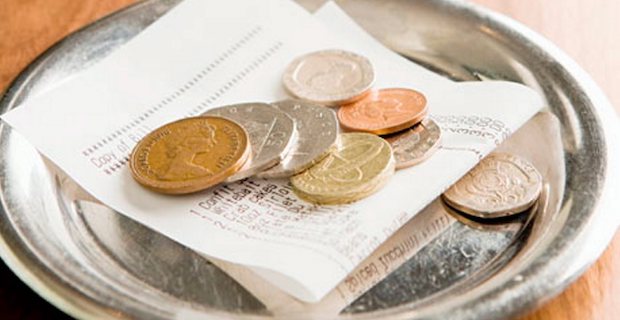 Restaurant and bar bosses will be banned from snatching workers’ tips to ensure employees are “treated fairly”, Theresa May has announced.Legislation will be introduced to outlaw deductions of up to 10 per cent by some of Britain’s leading chains, the prime minister promised.The announcement follows criticism that ministers have dragged their heels on making the change – first proposed in a consultation that closed two years ago.

In the meantime, Jeremy Corbyn stole a march, promising, in June to make it illegal for “rogue employers” to take a cut from money meant for workers.

The Independent launched our Fair Tips, Fair Paycampaign, which revealed staff tips were being used to top up the wages of workers who were being paid less than the minimum wage.

Ms May said: “We want to ensure that everyone is treated fairly in the workplace.

“That’s why we will introduce tough new legislation to ensure that workers get to keep all of their tips – banning employers from making any deductions. It’s another way we are building an economy that works for everyone.”

The change would also be fairer for bar and restaurant goers, who left tips “specifically for the service they receive”, the Conservatives said.

The consultation had found that restaurant customers were “overwhelmingly in favour of the tips they pay going to the people that serve them”.

However, the Tories were unable to say when the crackdown – applying to England, Scotland and Wales – would come in, saying only that it would be “as soon as parliamentary time allows”.

In July, The Independent revealed that the government had failed to publish any response to its 2016 consultation, despite the survey having closed more than two years ago.

Ministers had announced plans to make a voluntary code of practice for employers legally binding.

Trade unions called the delays “scandalous” and suggested minsters were trying to brush the issue under the carpet.

The controversy came as staff at restaurant chain TGI Fridays staged a series of walkouts over what they said was the company’s unfair tips policy.

Waiting staff at the American chain were told that 40 per cent of the tips they receive via credit or debit cards would be taken from them and given to kitchen staff, instead of the chain giving the latter a pay rise.

She said: “Under Labour, gig economy workers and the self-employed will get sick pay and parental leave, just like everyone else.

“While May has offered to match one of Labour’s policies, we have set out a plan for the biggest extension of individual and collective rights our country has ever seen.”

Keywords:
Workers Tips
Your comment has been forwarded to the administrator for approval.×
Warning! Will constitute a criminal offense, illegal, threatening, offensive, insulting and swearing, derogatory, defamatory, vulgar, pornographic, indecent, personality rights, damaging or similar nature in the nature of all kinds of financial content, legal, criminal and administrative responsibility for the content of the sender member / members are belong.
Related News