The helicopter which crashed killing Leicester City's chairman and four others span out of control after a mechanism became disconnected, investigators have said. 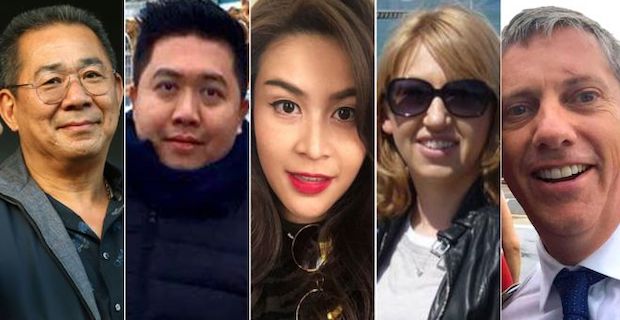 This caused the aircraft to turn uncontrollably to the right before it crashed near the King Power Stadium.

The AAIB said its inquiries into the 27 October crash are ongoing.

A public memorial for Mr Swaffer and Ms Lechowicz - who police said was a passenger at the time of the crash - is taking place at Guildford Cathedral on Thursday.

An inspection at the crash site found parts of a mechanism linking the pilot's pedals to the tail rotor had become disconnected and there was a "build-up of black grease" on one component.

The failure of the system led to the pitch of the tail rotor blades being changed "until they reached the physical limit of their travel".

The report stated: "The initiating cause and exact sequence of the failure that resulted in the loss of tail rotor control is being investigated as a priority."

Keywords:
Leicester HelicopterAAIBAccident Investigation BranchVichai Srivaddhanaprabha
Your comment has been forwarded to the administrator for approval.×
Warning! Will constitute a criminal offense, illegal, threatening, offensive, insulting and swearing, derogatory, defamatory, vulgar, pornographic, indecent, personality rights, damaging or similar nature in the nature of all kinds of financial content, legal, criminal and administrative responsibility for the content of the sender member / members are belong.
Related News