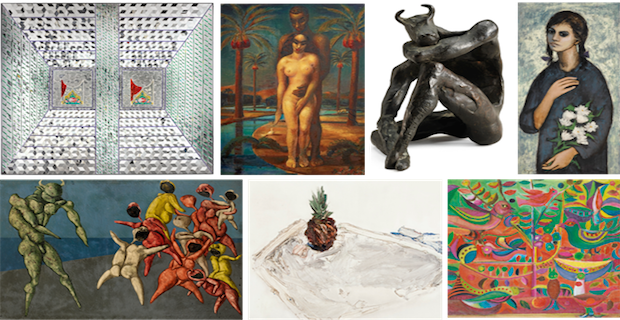 Defying classification, Monir Farmanfarmaian’s inimitable style evokes a nostalgia for Iran’s ancient culture alongside the influence her Western education and close friendships with the leading names of Abstract Expressionism in New York. Farmanfarmaian’s works shine a light on the unexplored traditions of geometry craftsmanship that she had grown up with, combining this with her love of gardens and fascination with colour and form. Indeed, she was the first contemporary artist to reinvent the Persian craft of mirror mosaics. In Recollections I, the centre is decorated with two medallions of reverse glass paintings of flowers, reminiscent of the Persian gol a bolbol (‘the rose and the nightingale’) designs that are synonymous with the lyrical ethos of the Safavid and Qajar periods. Thus her hypnotic artworks are a cutting-edge visual amalgamation of Persian elements with a modern aesthetic.

In December 2017, The Monir Museum opened in a former Qajar-era palace in Tehran – the first museum dedicated to a solo female artist in Iran. Her kaleidoscopic works are also held in collections of prestigious museums across the globe, including the Metropolitan Museum of Art in New York and the British Museum in London.

Appearing at auction for the first time, this sumptuous painting by Mahmoud Saïd depicts the Quranic icons, Adam and Eve as two imposing, almost surreal, figures within a lush desert oasis. Saïd is renowned the founder of modern Egyptian art during a time of intellectual renaissance in the country, and this daring and vivid work from 1937 perfectly encapsulates the dialogue between the history of art in Europe and the sensuous qualities of the prevailing Egyptian spirit. Inspired by Old Masters such as Lucas Cranach, Baroque artists Peter Paul Rubens and Rembrandt and the romantic fantasies of modernist Paul Cezanne, Mahmoud Saïd drew on a plethora of influences in a continuous quest for the ‘magical light’ derived from an Egyptian consciousness. Bringing to life ripened palm trees, the pooling blue canals of the Nile and rolling sand dunes in the distance, Saïd places these historic figures firmly in an idyllic yet familiar Egyptian landscape. By introducing a universal Biblical subject, juxtaposed with the traditional backdrop of Egypt, the artist encourages the viewer – be it the aristocracy or the general public – to imagine themselves as equal and important as the Western Orientalist would.

One of the rarest works by the pioneering icon of Iranian modernism to ever appear at auction, Bahman Mohasses’ The Minotaur Scares the Good People is a highly-charged representation of the artist’s lifetime grappling with demons of alienation, loneliness and disenfranchisement. The dreamscape is populated with a plethora of half-human half-beast creatures, one of very few works by the artist to contain quite so many detailed figures. Filled with movement, anguish and despair, the composition brings to mind both Pablo Picasso’s renowned series on the Minotaur and Francis Bacon’s anthropomorphic figures. A symbol of mythic power alongside mortality, Mohasses’ Minotaur is a manifestation of ultimate yet truncated power. Hailing from the sought-after period of the 1960s, this irreverent avant-garde painting is being offered at auction for the first time. The sale also features another of Mohasses’ minotaurs, in the form of a languorous yet sinewy bronze sculpture.

With an exceptional mastery over the minimalist aesthetic, Saliba Douaihy uses colour and shape to reveal a fascination with Lebanon’s landscapes. German philosopher Immanuel Kant’s writings stimulated the artist to reach a formalist aesthetic, driving Douaihy to emphasise compositional elements in his paintings to aspire to the ‘sublime’. Douaihy was able to move away from strictly academic style into a radical modernist approach, making him one of the true pioneers of Arab Modernism. This painting was originally in the collection of Adonis (Ali Ahmad Said Esber), a close friend of the artist and important Arab poet, translator, theorist and political activist and two-time Nobel Prize nominee.

Born in Aleppo, Syria and educated at the Academia di Belle Arti in 1960s in Florence, Kayali is considered to be one of the most important Syrian artists of the twentieth century. This previously unseen work from the 1960s, depicting his ten-year-old niece with great tenderness and compassion, comes from the estate of Mrs. Pearl A. Baker. A diplomat and worldly traveller, Mrs. Baker took a trip to visit her friends in the Foreign Service in Damascus in 1964 where she was introduced to Kayali, who at the time was there painting portraits for the U.N. personnel. In her personal memoirs she recalls having bought this painting, which she proudly hung in her living room in Minneapolis.

One of the most vibrant and iconic works by the pioneer of Iraqi Modernism ever to have appeared at auction, The Orchard of Knowledge symbolises a stepping stone into a new artistic era. Painted with an idealistic and ‘naïve’ style inspired by religious mythology and ancient folklore – and a palette drawing from the tribal colours of Iraqi ancient carpets – the work merges past and present in perfect harmony.

Manoucher Yektai established himself among the leading artistic lights of New York in the 1950s, mingling with renowned Abstract Expressionists such as Rothko, De Kooning and Pollock. The movement of Action Painting left a strong impression on the artist, reinforcing his Sufi-like appreciation of colour. A gifted poet with little concern for convention, he had a pioneering spirit and was determined to forge his own path. Yektai’s paintings are testament to this power of colour, visual brilliance and use of paint –in fact, he was the first Iranian to use layered paint and impasto in this way. This painting is a captivating example of Yektai’s energetic expressionistic style – his careful handling of colour and attention to the essential figurative details of the pineapple make this a truly outstanding piece which brings a new dimension to oft-favoured subject of still life.

Born in Egypt, Mayo spent his youth in Alexandria before moving to Paris to study art —straddling a trans-regional identity. The artist spent much of his time in the artistic hotbed of Montparnasse and befriending artists including Man Ray, Picabia and Foujita along with the infamous muse Kiki de Montparnasse. The paintings of Mayo revolved around the common themes of sensuality and eroticism which took different forms within his oeuvre. The cerebral and provocative nature of the Surrealist genre is a consistent theme in Mayo’s work and heavily impacted the burgeoning Surrealist movement in Cairo. The Egyptian surrealists founded the revolutionary ‘Art and Liberty Group’, incorporating notions of political libertarianism and Freudian concepts of the unconscious mind. Their legacy was most notably celebrated in the 2017 exhibition held at the Centre Pompidou in Paris.

A child of Kashan, Sepehri grew up among the town’s ‘gardens of paradise’ and the shady trees that offered cool respite remained central to the artist’s output throughout his life. At a time when many were seeking a Western education, Sepehri chose to travel to the East. Following a printmaking apprenticeship in Tokyo, Sepehri assimilated the Zen culture and minimalist aesthetic into his own universe of poetry, calligraphy and dusty deserts.

Keywords:
SothebyTurkish Art20th Century Art
Your comment has been forwarded to the administrator for approval.×
Warning! Will constitute a criminal offense, illegal, threatening, offensive, insulting and swearing, derogatory, defamatory, vulgar, pornographic, indecent, personality rights, damaging or similar nature in the nature of all kinds of financial content, legal, criminal and administrative responsibility for the content of the sender member / members are belong.
Related News