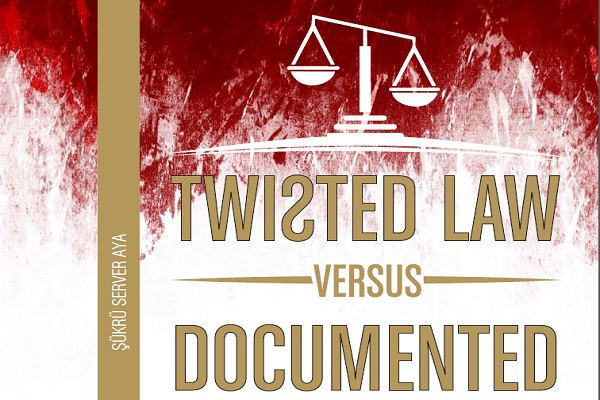 The Federation of Turkish Associations in UK and Ataturk Society UK are pleased to invite all friends to the book launch of “Twisted Lawversus Documented History” by Sukru Server Aya and a discussion on “Geoffrey Robertson QC’s Opinion on the Armenian Issue” on 29 November 2013 at Queen Mary University of London details of which you can find below.

Prof. Geoffrey Robertson, QC, wrote a book in 2009 entitled: “Was There an Armenian Genocide” in which he openly criticised the ethical dimensions of the British Government and Parliament for not having confirmed the existence of the alleged genocide. Mr Aya claims that Mr. Robertson used “selected sources” given to him for this study hence the great majority of his notes and justifications were simply not true and that he had twisted the law to serve his arguments. “Twisted Law versus Documented History”' is Sukru Server Aya's answer to the book referred to above by Prof. Geoffrey Robertson QC, and aims to offer the reader the counter opinions of a researcher on the many allegations in the book which are contrary to existing documentary evidence.

The book will be launched by Dr Pat Walsh and the event will be chaired by Prof Dr. Belma Otus Baskett. After the book launch and discussion there will be a question and answer session.  A limited number of copies of the book will be available for signing.

All are welcome to attend and we would be very pleased if you could circulate the event to all interested parties. The entry is free but by registration only therefore please kindly register by writing to turkishfederationuk@yahoo.co.uk or call/text 077 8890 8803.

You are invited to the book launch of

and a discussion on

The book will be launched by Dr PAT WALSH

and event will be chaired by Prof Dr BELMA ÖTÜŞ BASKETT

The launch will be followed by a book signing

RSVP by 25th November to turkishfederationuk@yahoo.co.uk

“Mr. Geoffrey Robertson, QC, wrote a book in 2009 entitled: “Was There an Armenian Genocide” in which he openly criticized the ethical dimensions of the British Government and Parliament for not having confirmed the existence of the alleged genocide.  I read the book in detail and found out that Mr. Robertson used “selected sources” given to him for this study by a member of the reputed Gulbenkian family and hence the great majority of his notes and justifications were simply not true and that he had twisted the law to serve his arguments. My book “Twisted Law versus Documented History” discloses my findings and replies to Mr. Robertson’s allegations, by exposing the documents and references on which I have based my answers.  The judgment and evaluation is left to the interpretation and comparison of the reader.”

"Mr Aya is a lively controversialist as well as being an indefatigable researcher with a rare knowledge of original documents. I have enjoyed this book and have been impressed by it, as I had enjoyed his earlier polemics with purveyors of Armenian nationalist propaganda."

”When you know that historically inaccurate propaganda material is being presented across the English-speaking world to teachers in order to inform impressionable children and jurists like Geoffrey Robertson are urging an ‘end of history’ and ‘case closed’ you can see the importance of Şükrü Aya’s book.”

"I congratulate Sukru Aya not just on this book, but on a lifetime dedicated to the truth."

This study is based on the book referred to above by Prof. Geoffrey Robertson QC, and aims to offer the reader the counter opinions of a researcher on the many allegations in the book which are contrary to existing documentary evidence.

'Twisted Law versus Proven Facts' is Sukru Server Aya's answer to 'Geoffrey Robertson's Opinion: Was there an Armenian Genocide?' It is the answer of a historian to a jurist who has stated in 'The New Statesman' that historians have no business in interfering in history. History should be the business of lawyers, according to Mr. Robertson, and not historians. Mr. Aya begs to differ. . . .

Mr. Aya provides a detailed commentary on Mr. Robertson's Opinion, challenging it, line by line, to get at the truth of the matter. He is not interested in constructing a case or winning an argument as lawyers are but in establishing the facts, as historians ought to. In doing so he produces another valuable contribution to the debate surrounding the tragic events of 1915 and after.

Şükrü Server Aya was born in Romania in 1930 to Turkish parents whose families had settled in Romania when it was still under Turkish rule. When WW2 started in 1939 his family moved to Turkey. He attended the American Robert College. After two years studying engineering, he had to quit and work to support his family.  He eventually graduated in 1953 as a B.A. in Literature, since he had to work two other jobs at the same time. He became an importer-distributor of workshop equipment and machinery and travelled the world on business and leisure.  He retired in 2011 and has since dedicated all his time to research and writing.

Over a period of more than half a century, his travels around the world have greatly helped him to develop an international and humanitarian attitude toward world affairs. As a Turk who has enjoyed the warm company of many friends of Armenian ethnicity during his school and business life, he has taken a keen interest in the so-called Armenian controversy. Added to this, his hobby of historical research has led him to investigate the accusations of “the pro-Armenian or neutral writers” on the controversial “Armenian Genocide” or in the words of Mr. Şükrü S. Aya, “the Armenian Fanfare”.

It was not until a friend convinced him to share his knowledge with others that he decided to put his compilations into book form. His books are not books of analytical interpretation that could be argued to contain subjective or inaccurate judgments, but an objective compilation of what anti-Turkish or Armenophile researchers or politicians have said or written over the years. He has intentionally not included as a source the rich Turkish archives or any material that the Armenian Revolutionary Federation (ARF) or Armenian Assembly of America etc. may stamp as a product of “denialists”. He has written five books on the subject and has given numerous talks about his findings both in Turkey and abroad. He would like to be clear that for this enterprise no person or institution has prompted him, nor has he received any assistance or rewards of any kind whatsoever.He calls himself a “truth defender” and shares the ideals of other worldwide truth defenders and many decent Armenians.

The Genocide of Truth (2008) Published by Istanbul Commerce University, Istanbul

“A Brief Hopscotch Stroll in the Ottoman History and Economy”: An illustrated pocket book by Sukru S. Aya for those who may not have time to read is available as video on the internet, see:

Born in Istanbul and educated at Robert College, Istanbul; Faculty of Languages, Ankara University; University of California, Berkeley, has degrees in B.S., Honors Diploma, MA, PhD. Lecturer for 23 years at Middle East Technical University, Ankara; Michigan University(12 years), Visiting Prof. at University of Pittsburgh, Kansai Gakuin University and Kobe College, Japan; Bilkent University, Ankara;University of Surrey at Roehampton for 2 years. She has written and translated many books as well as monographs; Editor of Ufuk magazine and TurkishArea Studies Review, has more than 60 articles published in Turkey, USA, UK, Austria and Spain. President of International Society for Contemporary Literature and Theatre.

Pat Walsh attended St Mary’s College, University of London, where he received a BSc (Hons.) in 1983. He went to Queen’s University, Belfast , and completed a PhD in Political Science. After 15 years working in business he became a teacher of History and Government and Politics in Co. Down, N.Ireland.

He is in the process of completing ‘Decline and Rise – the Catholic political predicament in Northern Ireland ’ due for publication in 2014.

He has also written a number of pamphlets including: ‘Remembering Gallipoli - President McAleese's Great War Crusade’ (2010), ‘Britain's Great War, Pope Benedict's Lost Peace - How Britain Blocked the Pope's Peace Efforts between 1915 and 1918’ (2006), ‘The Catholic Bulletin and the politics of post-war Europe’ (2005), ‘Ireland, Lionel Curtis and the Treaty’ (2002). All published by Athol Books.

Pat Walsh has written a number of articles on Ottoman/Turkish history for the Irish publications Foreign Affairs, Church and State and The Irish Political Review, mainly connected to the period of the Great War.

He was presented with an award in Ankara in 2010 by USAK (the Turkish think tank) for ‘outstanding intellectual achievement’ and was the subject of a full page interview with Leyla Tavsanoglu in Cumhuriyet on 1 May 2011.