WN, North Korea insisted on Tuesday that it be recognised as a nuclear weapons state, a demand the United States promptly dismissed as "neither realistic nor acceptable". 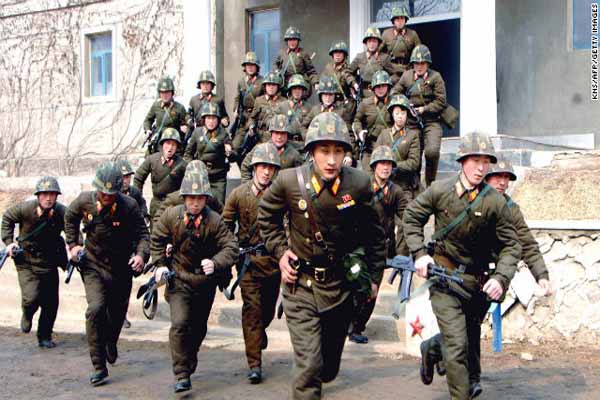 After weeks of tension on the Korean peninsula, including North Korean threats of nuclear war, the North has in recent days begun to at least talk about dialogue in response to calls for talks from both the United States and South Korea. The North's Rodong Sinmun newspaper rejected as unacceptable the U.S. and South Korean condition that it agree to dismantle its nuclear weapons and suspend missile launches before talks can begin.

"If the DPRK sits at a table with the U.S., it has to be a dialogue between nuclear weapons states, not one side forcing the other to dismantle nuclear weapons," the newspaper said, referring to the North by its official name, the Democratic People's Republic of Korea.

The United States swiftly rejected Pyongyang's claim of nuclear status, while NATO foreign ministers condemned its pursuit of ballistic missile and nuclear weapons programmes and called for "credible" talks to be held on denuclearisation.

"North Korea's demand to be recognised as a nuclear weapons state is neither realistic nor acceptable," Thomas Countryman, U.S. Assistant Secretary for International Security and Non-Proliferation, told Reuters in Geneva.

Countryman, who is heading the U.S. delegation to two-week talks on the nuclear Non-Proliferation Treaty (NPT), told reporters on Monday: "It is important that the world respond calmly but deliberately without changing our emphasis that the goal of the world to which North Korea is committed is a denuclearised Korean peninsula.

"And the more states that make that clear, the greater the chance we have of arriving at exactly that goal," he said.

A White House spokesman said this month North Korea would need to show it was serious about abandoning its nuclear ambitions for talks to be meaningful.

"We urge the DPRK to refrain from further provocative acts," the NATO ministers said, calling for North Korea to comply with Security Council resolutions and return to the NPT from which the reclusive country announced its withdrawal in 2003.

Pyongyang should abandon all nuclear weapons and nuclear and ballistic missile programmes in a "complete, verifiable and irreversible manner" and engage in credible talks on denuclearisation, they said.

North Korea signed a denuclearisation-for-aid deal in 2005 but later backed out of that pact. It now says its nuclear arms are a "treasured sword" that it will never give up.

It conducted its third nuclear test in February.

That triggered new U.N. sanctions which in turn led to a dramatic intensification of North Korea's threats of nuclear strikes against South Korea and the United States.

But in a sign the hostility was easing, North Korea last Thursday offered the United States and South Korea a list of conditions for talks, including the lifting of U.N. sanctions.

The United States responded by saying it awaited "clear signals" that North Korea would halt its nuclear weapons activities.

The Comprehensive Nuclear-Test-Ban Treaty Organisation said in Vienna on Tuesday that it had unexpectedly detected radioactive gases that could have come from North Korea's nuclear weapons test in February, possibly providing the first "smoking gun" evidence of the explosion.

But the April 9 measurement - almost two months after Pyongyang said it had carried out the underground detonation - gave no indication of whether plutonium or highly enriched uranium was used, it said.

The time that had passed before the so-called noble gases were picked up made it "very difficult" to distinguish between the two fissile materials, said spokeswoman Annika Thunborg of the Comprehensive Nuclear-Test-Ban Treaty Organisation (CTBTO).

The isolated east Asian state is believed to have tested plutonium bombs in its previous two such blasts, in 2006 and 2009. Any switch to uranium would increase international alarm as it could enable Pyongyang to greatly expand its arsenal.

Pyongyang's third nuclear test was registered virtually instantaneously via seismic signals around the world. But no radioactive traces that would have constituted conclusive proof were found in the immediate weeks afterwards.

The Vienna-based CTBTO, which has a worldwide network of monitoring stations, said in mid-March that it was highly unlikely any such radioactivity would be detected.

But Tuesday's statement said it made a significant detection of radioactive noble gases two weeks ago in Takasaki, Japan, about 1,000 km (620 miles) from the test site. Lower levels were picked up at another station in Ussuriysk, Russia.

"Two radioactive isotopes of the noble gas xenon were identified, xenon-131m and xenon-133, which provide reliable information on the nuclear nature of the source," it said.

"Detection of radioactive noble gas more than seven weeks after an event is indeed unusual. We did not expect this and it did not happen in 2009," the CTBTO added, referring to the reclusive country's previous nuclear test.

Large amounts of xenon gases are produced in fission, a nuclear reaction occurring both in nuclear arms and reactors.

"We are confident that the (North Korean) test site is among the possible source regions," the CTBTO said. But it could still not "exclude completely" that the radioactive traces came from somewhere else.

North Korea's February test yielded a stronger blast than its previous explosion four years ago, and Pyongyang said it had made progress in miniaturising an atomic weapon, essential to fitting it into the cone of a missile.

Tension on the Korean peninsula soared after the test.