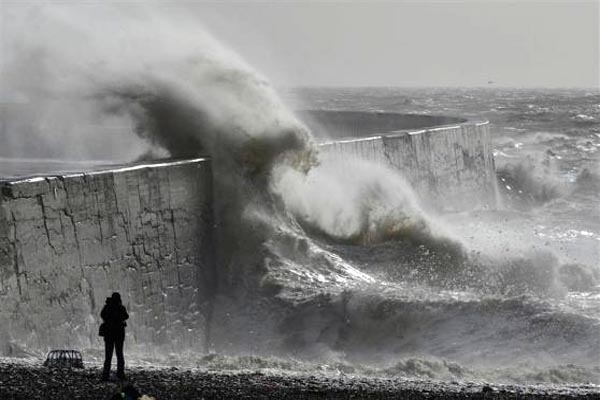 Gales of up to 80 miles (129 kilometres) per hour and heavy rain lashed southern England and Wales overnight, Britain's Met Office said, while severe flood warnings remained in place for much of southern and central parts of Britain. More than 141,000 people have been left without power after high winds brought down power lines, the Energy Networks Association which represents energy companies said. A 49-year-old woman died in the central London district of Holborn late on Friday after part of a building collapsed on the car she was driving, British police said. In the English Channel, an 85-year-old man died when a cruise ship carrying 1,084 passengers and crew was hit by a large wave during rough seas, the ship's operator Cruise & Maritime Voyages said. The ship was heading to her home port of Tilbury, southeast England after a 42-night voyage. Emergency services rescued 32 diners from a beachfront restaurant in Milford on Sea, on England's south coast, after the building was hit by a strong tidal surge and high winds. No-one was injured, police said.

The Met Office said Friday's weather was likely to be the last of the series of violent storms that have crossed the country in recent weeks, with the weather set to improve through the weekend. However, Britain's Environment Agency said flooding risk would continue for at least another week.

Parts of southwest England have been underwater for weeks after heavy rain in February followed the wettest January in nearly 250 years. More recently, areas along the River Thames to the west of London, an important economic corridor, have been inundated, forcing many from their homes.

The floods have submerged crops and destroyed cattle bedding and feed, threatening to hit production of crops and meat for months or even years, farmers have warned.

The government, which has been criticised for reacting too slowly to the floods, has pledged to spend whatever is needed for the relief effort.

Speaking after a meeting of the government's emergency committee on Friday, communities minister Eric Pickles said work was continuing to keep road and rail networks operating.

"All agencies are working effectively together on the ground and where needed extra police and military personal are being made available," he said.