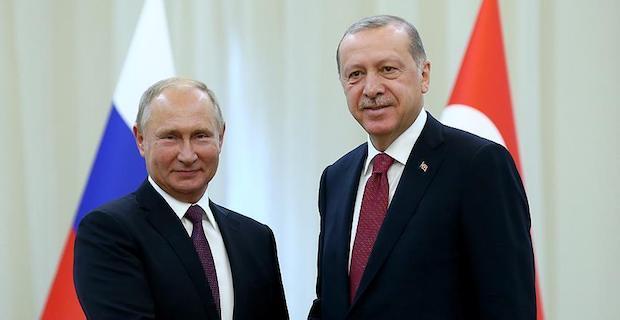 Turkey and Russia on Monday agreed to turn Syria's northwestern Idlib province into a demilitarized zone.

"We have agreed on the establishment of a weapons-free zone between the opposition- and [Assad] regime-controlled areas," Turkish President Recep Tayyip Erdogan said in a news conference with his Russian counterpart Vladimir Putin in the Black Sea coastal city of Sochi, following a meeting between the two leaders.

Following the news conference, Ankara and Moscow signed a memorandum of understanding calling for the stabilization of the situation in Idlib's de-escalation zone, in which acts of aggression are prohibited.

"I believe that with this memorandum, we have prevented a great humanitarian crisis in Idlib," Erdogan said.

Putin said the demilitarized zone will extend between 15 to 20 kilometers (9-12 miles) deep into Idlib by Oct. 15.

He added that the establishment of the zone would be accompanied by the withdrawal of armed groups, including the al-Nusra Front.

Putin said all heavy weapons had to be withdrawn from the zone by Oct. 10, according to Erdogan’s proposal. This includes tanks, rocket launchers, guns and mortars of all opposition groups.

He also said Russia and Turkey would restore transit routes between Syria's Aleppo, Latakia, Hama by the end of 2018.

Erdogan said Russia and Turkey will conduct joint patrols along the zone's perimeter.

He added Turkey would strengthen observation points in the Idlib de-escalation zone.

"The opposition will remain in areas in which they are already present. We will ensure that radical groups will not operate in the area," Erdogan said.

He said Russia will take necessary measures to protect the de-escalation zone in Idlib.

"We will jointly ensure the detection and prevention of both third parties' provocations and violations against this agreed memorandum," Erdogan added.

Putin said: "Russia and Turkey reaffirmed their determination to fight terrorism in Syria in all its forms. [...] The practical implementation of the planned steps will give an additional impetus to the process of a political settlement of the Syrian conflict, will accelerate work on the Geneva platform and will contribute to the return of peace to the Syrian land."

The Russian president said that this approach was supported by the Syrian side. He said consultations with Damascus could be held in the near future.

"The main structure that attempts against Syria's territorial integrity and threatens Turkey's national security is PYD/YPG," Erdogan said, adding these "terror swamps" should be drained.

Erdogan said the trade volume between Russia and Turkey increased 33 percent in the first of half of 2018 and reached around $15 billion.

He added 6 million Russian tourists will have visited Turkey by the end of this year.

"Our ministries are working in this regard and we expect to get immediate results about this," he added.

Putin said Russia and Turkey should trade in local currencies.

Keywords:
Turkey And RussiaSyrias Northwestern IdlibSochi
Your comment has been forwarded to the administrator for approval.×
Warning! Will constitute a criminal offense, illegal, threatening, offensive, insulting and swearing, derogatory, defamatory, vulgar, pornographic, indecent, personality rights, damaging or similar nature in the nature of all kinds of financial content, legal, criminal and administrative responsibility for the content of the sender member / members are belong.
Related News