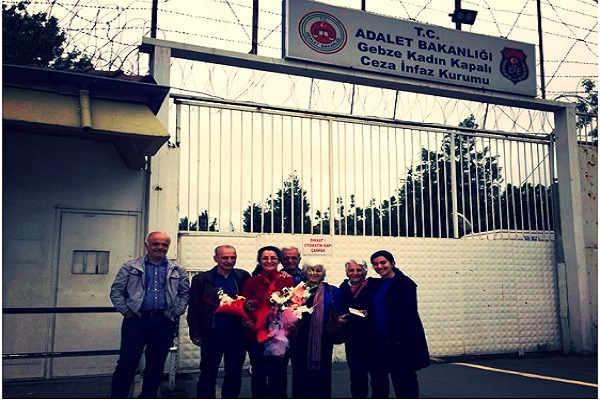 ‘‘We welcome the fantastic news that Füsun Erdoğan, Bayram Namaz and Arif Çelebi, have finally been released and can now return to their families, loved ones and colleagues,’’ said Mogens Blicher Bjerregård, EFJ President.

The lawyer representing the three journalists had submitted an appeal earlier this year following legal changes to the maximum of period of detention, but the appeal had been rejected.

But according to media reports, the Istanbul 20th High Court today took the decision to release eight socialist activists. Among those released were Erdoğan, who works for Özgür Radyo and Bianet, and Celebi and Namaz, who both work for the Atilim newspaper.

The Court based its decision on article 102/2 of the Turkish Criminal Code (CMK) and requested that the imprisoned activists be released because their detention period has exceeded the legal maximum period of five years following the adoption of Turkey’s 5th judicial reform package.  While they have been released, the journalists are not allowed to travel outside of Turkey until further notice by the court.

‘‘The release of Erdoğan, Namaz and Çelebi has given us new hope for our campaign to decriminalize journalism in Turkey but we need to go on for those journalists who are still behind bars in Turkey,’’ said Blicher Bjerregård. ‘‘It also shows that justice can be achieved if we are persistent.’’

Erdoğan, Namaz and Çelebi were condemned to life imprisonment on the charge of being members of a terrorist organisation (the MLKP) in November last year. This judgment by the Special-Duty Court (now abolished) deeply shocked the international journalism community and led to a series of protests by the EFJ and its affiliates, as well as Erdoğan’s son, Aktas Erdoğan and her supporters. Aktas Erdoğan went on a series of strikes in the past campaign for international support for the freedom of his mother Füsun Erdoğan.

‘‘We would like to thank those who have been supporting our campaign for their release. In particular, the tireless efforts of our affiliates, the Journalists Union of Netherlands (NVJ) and the Danish Journalists’ Union (DJ), who have been campaigning for the freedom of Füsun Erdoğan.’’ added Blicher Bjerregård.

At present, 32 journalists still remain in prison in Turkey. Most of them are accused under the dubious anti-terror legislation in this country. The EFJ and the International Federation of Journalists (IFJ) reiterate their call for the release of all imprisoned journalists in Turkey who are put behind bars for carrying out their profession.