Thomas Cromwell was the Islamic State

Thomas Cromwell, whose life it chronicles, comes across as a plucky, self-made Englishman, whose quiet reserve suggests inner strength and personal nobility. Back in the real world, Cromwell was a “ruffian” (in his own words) turned sectarian extremist, w 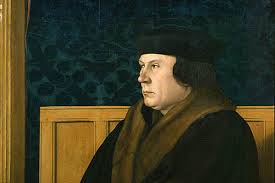 The UK's current primetime TV fantasy blockbuster du jour is Wolf Hall. Everyone loves a costume drama, but there is a world of difference between fictional history and historical fiction. One dramatizes real people and events. The other is an entirely made-up story set in the past. The current tendency is to blur the two, which Wolf Hall does spectacularly.

Thomas Cromwell, whose life it chronicles, comes across as a plucky, self-made Englishman, whose quiet reserve suggests inner strength and personal nobility. Back in the real world, Cromwell was a “ruffian” (in his own words) turned sectarian extremist, whose religious vandalism bears striking comparison with the iconoclasm of Islamic State or the Afghani Taliban. Thanks to Wolf Hall, more people have now heard of Thomas Cromwell, and this is a good thing. But underneath its fictionalized portrayal of Henry VIII’s chief enforcer, there is a historical man, and he is one whose record for murder, looting, and destruction ought to have us apoplectic with rage, not reaching for the popcorn. Historians rarely agree on details, so a lot about Cromwell’s inner life is still up for debate. But it is a truly tough job finding anything heroic in the man’s legacy of brutality and naked ambition. Related Articles Mark Rylance as Thomas Cromwell in the BBC's adaptation of Hilary Mantel's Wolf Hall Wolf Hall, first-look: 'masterful' 21 Jan 2015 Damian Lewis's inspiration for Henry VIII: 'Wills and Harry' 21 Jan 2015 Changing faces of Thomas Cromwell 09 Jan 2014

Against a backdrop of Henry VIII’s marital strife, the pathologically ambitious Cromwell single-handedly masterminded the break with Rome in order to hand Henry the Church, with its all-important control of divorce and marriage. There were, to be sure, small pockets of Protestantism in England at the time, but any attempt to cast Cromwell’s despotic actions as sincere theological reform are hopeless. Cromwell himself had minimal truck with religious belief. He loved politics, money, and power, and the reformers could give them to him. Flushed with the success of engineering Henry’s divorce from Catherine of Aragon and his marriage to Anne Boleyn, Cromwell moved on to confiscating the Church’s money. Before long, he was dissolving monasteries as fast as he could, which meant seizing anything that was not nailed down and keeping it for himself, for Henry, and for their circle of friends. It was the biggest land-grab and asset-strip in English history, and Cromwell sat at the centre of the operation, at the heart of a widely-loathed, absolutist, and tyrannical regime. When Anne Boleyn pointed out that the money should be going to charity or good works, he fitted her up on charges of adultery, and watched as she was beheaded. As an adviser to Henry, Cromwell could have attempted to guide the hot-headed king, to tame his wilder ambitions, counsel him in patience, uphold the many freedoms enjoyed by his subjects. But Cromwell had no interest in moderation. He made all Henry’s dreams come true, riding roughshod over the law of the land and whoever got in his way. For instance, we are hearing a lot about Magna Carta this year, but Cromwell had no time for tedious trials and judgement by peers. With lazy strokes of his pen, he condemned royalty, nobles, peasants, nuns, and monks to horrific summary executions. We are not talking half a dozen. He dispatched hundreds under his highly politicised “treason” laws. (When his own time came and the tables had turned, he pleaded to Henry: “Most gracyous prynce I crye for mercye mercye mercye.” But he was given all the mercy he had shown others.) And then there is his impact on this country’s artistic and intellectual heritage. No one can be sure of the exact figure, but it is estimated that the destruction started and legalised by Cromwell amounted to 97% of the English art then in existence. Statues were hacked down. Frescoes were smashed to bits. Mosaics were pulverized. Illuminated manuscripts were shredded. Wooden carvings were burned. Precious metalwork was melted down. Shrines were reduced to rubble. This vandalism went way beyond a religious reform. It was a frenzy, obliterating the artistic patrimony of centuries of indigenous craftsmanship with an intensity of hatred for imagery and depicting the divine that has strong and resonant parallels today.