Turkey, although often hailed as a “model of democracy” in the Middle East, is at best an illiberal democracy. 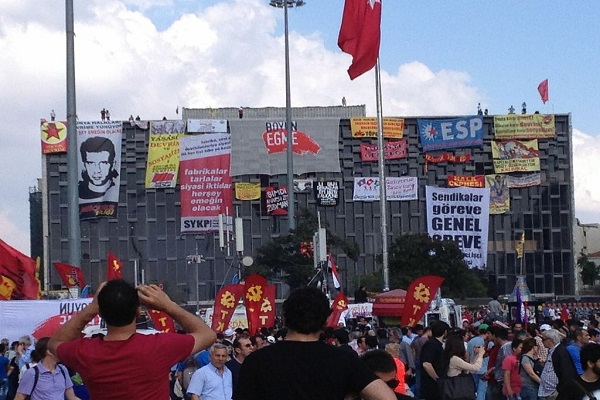 The recent unrest in Turkey goes beyond just protesting to save Gezi Park from becoming a mall; it has become a prompt-critical event that has set off a chain reaction throughout Turkish society. People for the first time since Prime Minister Erdoğan came to power in 2002 are demanding change and further civic input into the decision-making process in public policy.  For those who are close observers of Turkish politics, the current protests and government reaction should not come as a surprise.  What has been unexpected, however, is how quickly Turkey has crossed the proverbial Rubicon and is now faced with a decision at the highest echelons of power as to whether Turkey will remain an illiberal democracy or finally make the transition to becoming a more open and liberal democracy. What currently is at stake in Turkey is nothing short of the future of liberal values in a state that has become increasingly authoritarian .  Nothing underscores this point more than the gathering of people from different ideologies in Taksim Square and across almost every major city.  From Communists to Conservatives, from Gay and Lesbians to religious groups and even supporters of Prime Minister Erdoğan, people are seemingly united against the government’s  increasing control of lifestyle choices and the disproportionate response carried out by government forces against protestors.

Turkey, although often hailed as a “model of democracy” in the Middle East, is at best an illiberal democracy.  There are more journalist in jail in Turkey than any other country in the world, including countries such as China and Iran.[1] Additionally, many people have been arrested and jailed without a trial for protesting over the years. One such as example is the 500 students who were detained in 2011 for protesting tuition rates.[2]  With massive protests in almost every major city and the ongoing human rights abuses being conducted by police, how did a country that was said to be on the path of justice and democracy  turn into an illiberal democracy? And why have the events of Taksim Square occurred in the first place? To answer those questions one has to just look at the political developments of Turkey over the last decade of Prime Minister Erdoğan’s Justice and Development Party’s (Adalet ve Kalkınma Partis  “AKP”) unchecked rule.

Since the founding of the Republic in 1923, the military has executed three direct coup d’états in 1960, 1971, and 1980. In 1997, vis-à-vis a leaked memorandum, the military toppled the government of the first Islamist Prime Minister Necmettin Erbakan.[3] A decade later in 2007, the then Chief of General Staff of the Military, General Mehmet Yaşar Büyükant issued what is now know as the “e-memorandum” , which  confronted the probable election of Turkey’s current president, Abdullah Gül, who is known to have a history in political Islam and whose wife wears the Islamic head scarf—a symbol of political Islam to Turkey’s secular establishment.[4] The military, which adheres to the Atatürk republicanism of the 1920s and 1930s, formed a “deep state” over the decades that until recently held a veto on matters of the state. In years after Prime Minister Erdoğan’s election, people were reminded of the terrors the military conducted against their people and the exposure of the Ergenekon plot led people to further support and crave civilian rule and democratic elections. Now, as the police crackdown on protestors the same narrative is being recanted.

As the power of the Turkish military waned, the fortunes of the former Mayor of Istanbul Recep Tayyip Erdoğan rose.  In 2002,  his party was first elected into office. Turkey’s star has been on the rise ever since.  Over the last decade Turkey’s GDP grew from 232 billion in 2002 to 851 billion in 2012, and by 2015, Turkey is expected to become a 1 trillion dollar economy.[5] In the international realm, Turkey has become a major regional power and continues to grow more important as a NATO and U.S. ally. In the eyes of those outside of Turkey, Prime Minister Erdoğan has transformed the Turkish Republic into a pivotal world player.  To these observers, Erdogan and his party represent the first government to have broken the military’s hold on power.  Erdogan, moreover, is seen by outsiders as a leader who was to move Turkey into the European Union and who would liberalize and democratize the country within those standards.  At first, Erdogan set about reforming the countries internal polices to match his own brand of politics. He emphasized the policies that got him elected in the first place: the liberalization of the Turkish economy and a movement towards democracy. Despite these lofty ambitions, however, social interventionism would soon creep into important policy decisions.

Turkey’s growing power, economic dynamism, and resurgence as a global actor have led to the government’s  increased confidence in its abilities.   Accordingly, the government has sought to change the social dynamism of the country to reflect a more social-conservative mold. Therefore, the sustained growth of the economy is of vital importance when considering the government’s prospects of continued rule.  Up until recently, it was believed to be the key to maintaining the AKP’s  board coalition of conservative, religious, and liberal business-oriented individuals.  The AKP’s increasingly interventionist social agenda with acts such as the curtailment of alcohol, the reform of the school system, and detention of journalists within Turkey, however, have  caused cracks to surface in the AKP’s board power base. These cracks ultimately ruptured  when protestors were shot with tear gas at Gezi Park. At that moment the veil of ignorance was dropped.  Thousands realized that if they were going to have their voices heard and be given greater input into civic questions they would have to unite.  This is where we are currently at as thousands of people are congregating in city squares all across Turkey.

For years, many nationalist and secularists ,with few exceptions, have silently opposed the direction the country was heading in as the AKP won three consecutive elections and a referendum to reform the judiciary. The electoral success Prime Minister Erdoğan is incomparable to any other leader in Turkish history. However, because nobody has seriously challenge to his policies since taking office, therein lies the problem.  Given electoral rules that grant a seat bonus to the winning party, coupled with a weak and divided opposition.[6]  the AKP has been able to pass legislation and govern at will. This is coupled with an attitude of leadership by domination by Prime Minister Erdoğan, who believes his mandate to rule is democratic; yet if there is no free media or tolerance for an opposition, the true context of the Turkish democratic experience is an illiberal one. Thus the underpinning issue in Turkey is that democracy does not necessary equate freedom as there has been no checks on majority rule and no attempt by Prime Minister Erdoğan to hold public discussions on social policy.

The folly of the  government is that democracy does not amount to liberalism or constitute a blank cheque to govern without having input from different cleavages of society.  The events that are now transpiring are a backlash to years of the government’s imposition of law without  seeking civic input into that process. There is no doubt that Prime Minister Erdoğan has a democratic mandate to govern, but if Turkey does not reform its internal political system or establish a strong opposition party the current government is doomed to over-reach as there is nothing  systemically preventing them from imposing the tyranny of the majority.

The current tension and violence in Turkey has little to do with the economy or Turkey’s standing in the world. It has little to do with the Syria or the Kurdish question. Instead it is something new to the Turkish democratic experience and  an event unprecedented in its past. The issues stem from the ever prominent link between politics and religion, the government’s intervention in lifestyle choices, and the demands of various social groups throughout Turkish society who insist on greater input into policy decisions. The events of May 31, 2013 have lifted the veil of ignorance that has previously covered the different segments of Turkey’s vast pluralistic society.  People are finally realizing that they are all in the same boat and are uniting to achieve a democratic society that promotes civic debate.

Prime Minister Erdoğan’s belief of his popular and unquestioned leadership might have finally caught up to him.  He might not be able to walk away or backtrack from the human right violations his government has committed during the last few days. Reports of the use of agent orange (a chemical strictly banned by the U.N. resulting in severe health problems), the use of live ammunition, and firing gas into populated subway stations while locking the doors so people are made to suffer, have surprised many allies of Prime Minister Erdoğan.  With scores of people being killed, all the work that Erdoğan has done to build and promote Turkey as a model of democracy,  gain admittance in the European Union, and increase Turkish prestige may have come to naught. It is now time for a clear and irreversible choice to be made.  Turkey must decide on whether it will remain an illiberal democracy or open up and establish a free and independent media and a strong opposition, which are the pillars to any vibrant liberal democracy.

[6] The Republican People’s Party (Cumhuriyet Halk Partisi) has been unable to reform its image and remove its baggage from the military era.  Similarly, the Nationalist Movement Party (Milliyetçi Hareket Partisi)  continues to remain unable to garner more than 10% of the national vote.