Syria: A Proxy War between Russia and the US?

All eyes are on what will happen in Syria. While Turkey, the US, Russia, China (by supporting Russia’s stance at the UN), and Saudi Arabia all have interests in the country and are vying to influence the outcome in post civil-war Syria. 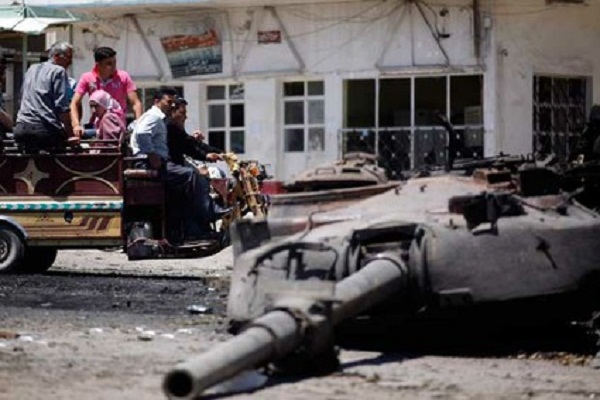 In Syria, there is a proxy war between Saudi Arabia, which is financing the Syrian rebels (‘the Free Syrian Army’) and her staunch ally, the US on the one hand and Russia, which further protects Syria by preventing Chapter 7 of the UN charter on the Security Council on the other. Turkey, as could be understood from the direct phone calls between Prime Minister Recep Tayyip Erdoğan and the US President Barack Obama, is also a party in this war in order to influence the outcome in post-civil war Syria. However, the people of Syria should decide how they want to be governed and it should not be up to outside powers and their interests to decide how the Syrian people should run their country.

There are rumours circulating that Saudi Arabia is financing the Syrian rebels (the Free Syrian Army) because the rebels may want to impose an Islamic government in a post-Assad Syria (Edmonton 2012). The US is a staunch ally and supporter of Saudi Arabia, because of its oil interests, vast infrastructure in the country and long diplomatic legacy with the Kingdom. On the other side of the conflict, Russia is supporting the Assad regime by selling the regime arms (Rosenberg 2012). Russia further protects Syria by preventing Chapter 7 of the UN charter on the Security Council, effectively preventing any UN intervention in the conflict. By taking a step back and looking at the big picture, one may ask, could this uprising in Syria really be another proxy war between the US and Russia?  A proxy war, in which the roles are reversed and it is Russia supporting the authoritarian regime and the US supporting the rebels; a major role reversal since the days of the Cold War. Still, could it allude to an abridged version of the Soviet-Afghanistan war, or possibly Korea, Cuba, Vietnam? Given that Arab revolutions parallel the spread of communism during the Cold War and this frightens the US.

In 1954, the Eisenhower administration, while laying out its plans for South East Asia, announced its domino theory, which states that if one country falls to communism then its neighbours will easily succumb to communism as well.[1] This is the theory that the US used throughout the Cold War and was also its justification to enter into Vietnam (Britannica 2012). Furthermore, it was one of the main components of foreign policy, which shaped America’s worldview during the cold war. Similar to the domino theory, the Arab Spring can be seen though a similar lens. As Arab societies are ousting their old, secular, authoritarian regimes, they are seemingly then replacing them by electing Islamic governments. There are some governments which have not elected Islamic governments, but it does not mean that it cannot change over time. Similar to communism, Islamic governance is a perceived threat to the free world, or so it is what the US wants the general public to believe. Since 9/11 the US has been manipulating Islam in a negative fashion to create the “Other”.  This parallels the Cold War and scares the US, its public—like the red scare—and its allies in the Middle East.

Syria is, perhaps, the last stronghold of the traditional authoritarian regimes in the Middle East and the last remaining country in the region, in which Russia maintains a healthy relationship. What happens after the Assad regime falls will potentially shape the new paradigm that will come into the Middle East. Given this, Russia does not want to lose it, because if it does, then Russia is effectively out of the Middle East. Additionally, Russia has its only Mediterranean naval base located in Tartus and losing that would be a big loss for Russia, considering the fact that Assad approved it as the permanent Middle East base for Russia (Byranski 2012). The US, despite fearing Islamism, is supporting the rebels because of its humanitarian policies and its role in the UN. In her speech at the US-Islamic World Forum in Doha, Qatar on 14 February 2010, The US Secretary of State, Hillary Rodham Clinton said the following on the United States’ commitment to supporting the stop of Islamic extremist violence:

Many faith leaders and citizens from Muslim communities have voiced their outrage at those who claim to kill in the name of God. And we share this view. And are determined to prevent extremists from driving wedges between Muslims and non-Muslims—in America or anywhere. We all have a stake in this fight, and the United States is committed to working in partnership with Muslim-majority countries as we face this threat together. Because Islam is—and must be—an important part of the solution in confronting violent extremism. (Clinton 2010)

Sure it is good to tackle the problem of Islamic extremism, but how does aiding the rebels, effectively accomplish this, when there are extremists fighting on the side of the rebels and could sweep power at the end of the conflict? Could this be a similar situation like Afghanistan in the 1980s? The US funded the Mujahedeen to fight the Soviets and in the end the “freedom fighters” turn their guns on the US.

The US would rather see stability in Syria, due to its experiences of the years of violence in Iraq since 2003. Turkey, envisioning the same as the US, does not want to see further destabilization on its borders with the simmering Kurdish question heating up and the possibility of the PKK seizing the opportunity in a war-torn Syria to grow stronger and launch attacks from the destabilized northern border region of Syria.

US President Barack Obama and Turkish Prime Minister Recep Tayyip Erdoğan have been speaking on the telephone recently on the topic of what type of regime they want to see in post-Assad Syria. The US would prefer it stay secular and does not want to see de-ba’athification of the country (Turkish Weekly 2012). The US wants to contain the spread of Islamic governance because it is a perceived threat to the likes of the spread of communism during the Cold War; coupled with the fact that this war is shaping up to be a proxy war between the interests of the US and Russia it follows a very similar scheme of Cold War containment.

Turkey is a good partner for the US because, it has been acting as a medium between the West and the Middle East. In working with Turkey it may be able to ensure it gets the neutral, non-threatening regime it Syria. Turkey may be able to work with defecting Syrian generals and government officials in imposing a swift transition to government after the collapse of the current regime. However, despite what outside powers want, it is really a matter for the Syrians themselves to decide what type of government they would like to have in place. It is this type of outside influence that has been the cause of so many problems that plague many of the world’s developing countries. The people of Syria should decide how they want to be governed and it should not be up to outside powers and their interests to decide how the Syrian people should run their country.

Published on CENTRE FOR POLICY ANALYSIS AND RESEARCH ON TURKEY, (RESEARCHTURKEY) http://researchturkey.org