'Rabaa sign' becomes the symbol of massacre in Egypt 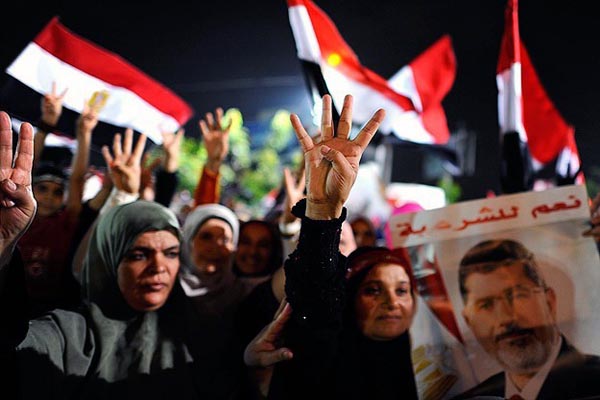 The 'Rabaa sign' has become the symbol of protests against the military coup in Egypt and the center of the anti-coup protests, Rabaa al-Adawiya Square. Made by raising four fingers with the thumb resting on the palm, the sign has come to represent civilian demonstrations protesting the ouster of Egypt's first democratically elected president Mohamed Morsi and the ensuing violence that killed hundreds of people. Rabaa means four or fourth in Arabic. Just a few hours before the massacre on August 14, anti-coup protesters in Egypt were struggling to voice their demands to the world by raising their four fingers. Rabaa al-Adawiya Square is now as famous as Tahrir Square in Cairo due to the resistance it hosted by hundreds of thousands of protesters for more than two months. Last week, the square witnessed some of the worst atrocities against civilians in recent years. Turkish Prime Minister Recep Tayyip Erdogan also flashed the Rabaa sign during a rally of his Justice and Development (AK) Party on Saturday in the northwestern province of Bursa.

Turkey has emerged as one of the fiercest critics of the July 3 ouster of Morsi by the powerful Egyptian military. Ankara has described Wednesday's violent crackdown on two major anti-coup sit-ins in Cairo's Rabaa and Giza's Nahda squares as a "massacre".

Rabaa al-Adawiya Square was named after a religious woman called Adawiya. Since Adawiya was the fourth child of the family, the Arabic adjective rabaa was affixed to her name.

The significance of the name is said to come from Adawiya's struggle for freedom all her life. Now with the anti-coup protests, the meaning of this name has given birth to a new symbol.

Anti-coup protesters use the Rabaa sign both as a reference to the name of the square and to distinguish themselves from pro-coup protesters in Tahrir Square, which prefer the internationally popular "V sign" for victory or peace.

The Rabaa sign has gradually risen in popularity in Egypt during the protests and eventually come to be used as often as the V sign.

The anti-coup protesters say that the Rabaa sign, besides being the symbol of demonstrations, carries some other meanings as well.

It obviously refers to the square, and distinguishes it from Tahrir Square that housed the supporters of the military coup. But the sign also refers to the deposed president as the fourth president of Egypt after Nasser, Sadat and Mubarak.