On headway on Ukraine after five-hour Minsk summit 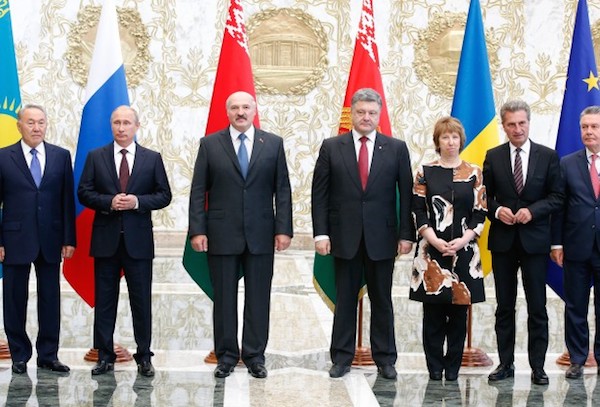 Russia and Ukraine have failed to reach a concrete agreement over the crisis in eastern Ukraine after talks in the Belarus capital Minsk. Belarus’s President Alexander Lukashenko said the two countries' presidents had different views over the solution to the crisis that has killed more than 2,000 people. "The parties have different ideas for the solution, but the both sides believe in dialogue to resolve the crisis," Lukashenko said late on Tuesday following a five-hour summit. Both President Vladimir Putin and President Petro Poroshenko had signaled ahead of the summit that they were open to any offer that would resolve the stalemate. Lukashenko said that the two leaders agreed on the de-escalation of the crisis and the freeing of prisoners. Putin and Poroshenko met face-to-face for the first time since a short meeting in Normandy in June. It is hoped the meeting will pave the way for an end to the four-month conflict between Ukrainian government forces and pro-Russian rebels. The meeting was also attended by Kazakh President Nursultan Nazarbayev and Baroness Catherine Ashton, the European Union’s foreign affairs representative. The negotiations are part of a Customs Union summit. The union consists of Russia, Belarus and Kazakhstan.