North Korea reiterated it will not give up nuclear arms

North Korea reiterated on Saturday that it would not give up its nuclear weapons, rejecting a U.S. condition for talks 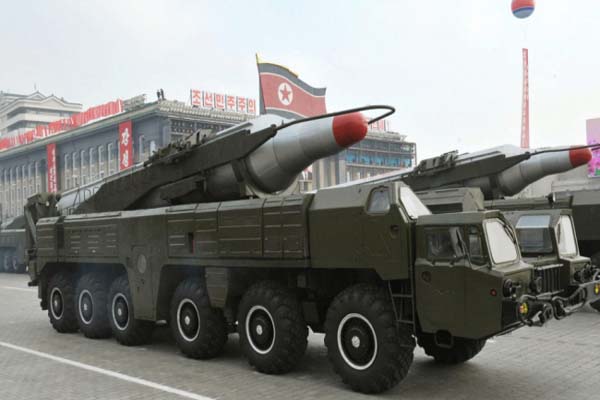 North Korea, in a sign of a possible end to weeks of heightened hostility on the Korean peninsula, offered the United States and South Korea a list of conditions on Thursday for talks, including the lifting of U.N. sanctions.  But the United States said it was awaiting "clear signals" that North Korea would halt its nuclear weapons activities. "The U.S. should not think about the denuclearisation on the peninsula before the world is denuclearised," the North's state-run Rodong Sinmun newspaper said in a commentary. "There may be talks between the DPRK and the U.S. for disarmament but no talks on denuclearisation," it said. North Korea's official name is the Democratic People's Republic of Korea (DPRK). North Korea signed a denuclearisation-for-aid deal in 2005 but later backed out of that pact. It now says its nuclear arms are a "treasured sword" that it will never give up.  It conducted its third nuclear test in February.

The test triggered new U.N. sanctions which in turn led to a dramatic intensification of North Korea's threats of nuclear strikes against South Korea and the United States.

U.S. Secretary of State John Kerry visited China, South Korea and Japan this month for talks on North Korea and stressed his interest in a diplomatic solution to the tension on the peninsula.

He later told a U.S. Senate hearing that North Korea's list of conditions was "at least a beginning gambit", but added that it was "not acceptable, obviously, and we have to go further".

The Rodong Sinmun said U.S. talk of dialogue was "nothing but rhetoric".