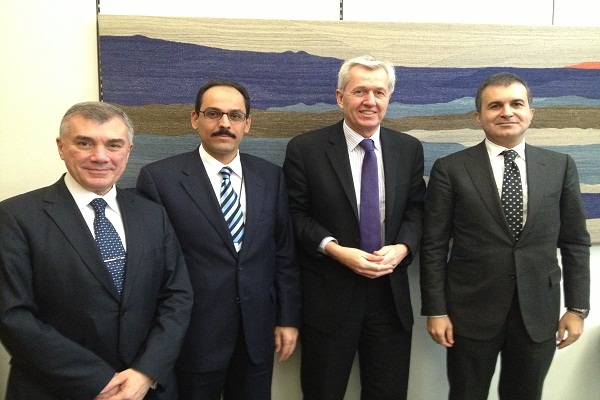 Turkish Ambassador to the UK Ahmet Ünal Çeviköz met with Nick de Bois MP, Vice Chair of the UK's All Party Parliamentary Trade & Export Group to discuss creating closer UK-Turkish relations. They were joined by Ibrahim Kalin, the Deputy Under-Secretary at Prime Minister Erdogan's office and Omer Çelik, the Deputy Leader of the AKP, with their talks also covering important issues of democracy, Cyprus and Syria.

Mr de Bois, MP for Enfield North, agreed to help lead a trade delegation to Turkey early next year. Presently, Turkey imports over $212 billion dollars but the UK is not a significant trading partner. Russia, China, Germany, Italy and France all enjoy a closer relationship.

Mr de Bois said, "We have a close political relationship with Turkey, we support their entry into the EU and above all many Turkish and Turkish Cypriot people live and work in this country. Yet the UK has failed to build on this relationship by selling our excellent products to Turkey. In this climate we need to be exporting much more to growing economies and I want to see the UK selling more to Turkey."

He added, "We have the skill and the products that are needed to support the Turkish economy, so I am delighted to be playing an active part in building this vital area of business between our two countries”.