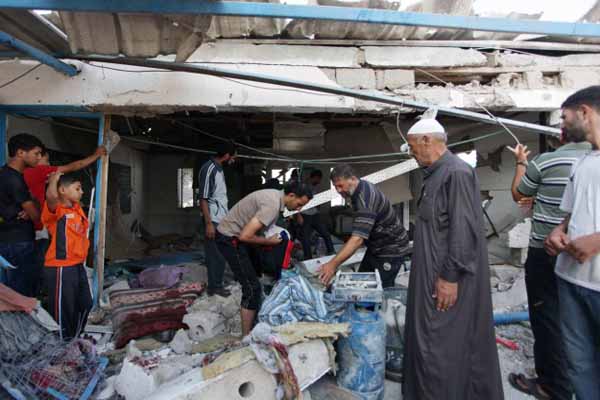 If the strike on this school was the result of Israeli artillery fire it would constitute an indiscriminate attack and a likely war crime, says Amnesty's Middle East and North Africa programme director, Philip Luther.  "Artillery should never be used against targets in crowded civilian areas and its use in such a manner would never be considered a ‘surgical’ strike,” adds Luther.  The school was shelled despite the fact that the UN agency that works with Palestinian refugees, UNRWA informed the Israeli army 17 times of its coordinates, Amnesty said.  In a statement on Wednesday, the UN relief agency’s Commissioner General Pierre Krahenbuhl said: "Last night, children were killed as they slept next to their parents on the floor of a classroom in a UN designated shelter in Gaza." Anadolu Agency's office in Gaza was also struck on Tuesday despite the coordinates of the office being given to Israeli officials.  Hamas radio station, Al-Aqsa TV station was also the target of Israeli strikes on Tuesday.   On 27 July, an Israeli rocket hit another Al-Aqsa TV office, and on 22 July the offices of Al Jazeera were struck.

“The strike on the power plant, which cut off electricity and running water to Gaza’s 1.8 million residents and numerous hospitals has catastrophic humanitarian implications and is very likely to amount to a war crime. There can be no justification for targeting a civilian structure that provides crucial services to so many civilians. The scale of the consequences of this attack are devastating and could amount to collective punishment of Gaza’s population,” said Luther.

According to YouGov survey, almost two thirds of the British public (62%) believe that the Israeli government is committing war crimes.

The death toll from the ongoing Israeli offensive against the Gaza Strip has hit 1363, including 129 who were killed on Wednesday alone, the Palestinian Health Ministry said on Wednesday.