'Gulen no longer useful to US'

Bekir Bozdag said Gulen's direction of the July 15 coup plot was a "fact known by all". 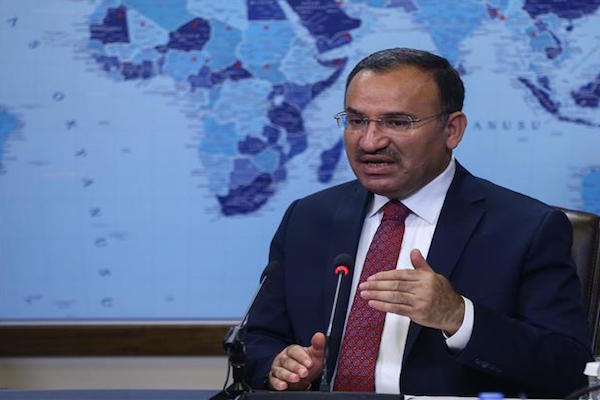 Answering journalists’ questions at Anadolu Agency's Editors' Desk in Ankara on Tuesday, Bekir Bozdag said Gulen's direction of the July 15 coup plot was a "fact known by all".

"If you ask what the message of Aug. 7 and July 15 is, it is a declaration to both friends and enemies that henceforth coups cannot be staged in Turkey,” Bozdag added the Turkish people “would never allow it”.

"Our nation said it would settle its freedom and future," the minister said.

Bozdag went on to say that tools which act with foreign forces behind them cannot "seal the fate" of Turkey or decide the country’s future.

The justice minister also said the U.S. authorities' message so far about extraditing Pennsylvania-based Gulen had been "positive".

"They discuss extraditing Gulen and care about the demands of extradition. We consider this a positive development," Bozdag said. "The U.S. must facilitate the unconditional extradition of Fetullah Gulen to Turkey."

Bozdag added that he believes the U.S. will do what is necessary and return Gulen to Turkey.

Bozdag rejected allegations of ill-treatment reportedly meted out to some coup suspects while in custody:

"It is a great distortion of events to display acts during the conflict as if they were made during the custody period," Bozdag said. "The files are clear. Turkey is a country which acts within the understanding of zero-tolerance of torture."

Bozdag reiterated that although Turkey temporarily suspended the European Convention on Human Rights [ECHR] for the duration of a three-month state of emergency the country had not compromised on its obligation to prevent torture.

The justice minister said stories and commentaries about the torture issue are made "deliberatively to shadow Turkey's righteous battle".

"International institutions' claims on torture are subjective allegations. This parallel structure's lobbying is powerful in Europe and in the U.S. These institutions publish reports on Turkey without asking any Turkish official or without gathering any actual information about Turkey."

Bozdag also questioned the functioning of the Fetullah Terrorist Organization (FETO), asking: "Why would a legitimate organization give aliases to its members?"

"If there is transparency in where you go, then everything is good in there," Bozdag said. "But they immediately give you an alias ... Without a doubt, that place is illegitimate, unethical and unlawful."

Turkey's government has repeatedly said the coup attempt was organized by followers of Gulen, who has lived in self-imposed exile in the U.S. since 1999.

Bozdag gave latest figures for those arrested, remanded in custody or under judicial restrictions.

Bozdag said the number of arrests and detainments is constantly changing.

When asked about the case of Adil Oksuz, an assistant professor at Sakarya University's Faculty of Theology who is suspected of being one of the top coup plotters, Bozdag said "all of Turkey" was looking for him.

"Hopefully our security forces will lock him down and hand him over to justice. The Supreme Board of Judges and Prosecutors has already started an investigation about the prosecutors who interrogated him during the coup night."

Oksuz went to Akinci 4th Main Jet Base on night of July 15 but was released after a 21-minute interrogation. An arrest warrant has been issued for his detention.