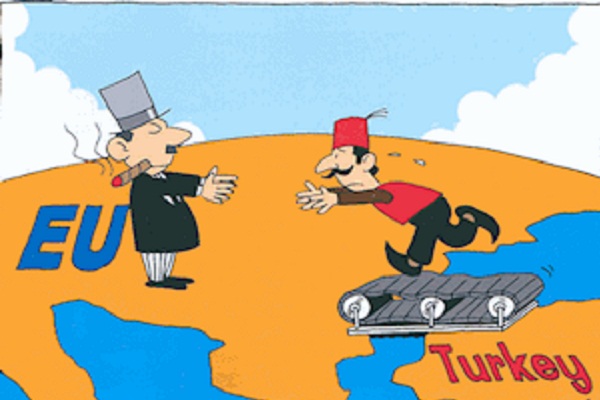 The European Parliament today in Strasbourg, on the initiative of the S&D Group, adopted a strong resolution on the EU-Turkey accession process, urging the Council and the European Commission to temporarily freeze accession negotiations with Turkey. This should be maintained as long as the Turkish authorities continue to neglect and undermine democracy and the rule of law.

The European Parliament also warns the Turkish authorities that the re-introduction of capital punishment would have to lead to a formal suspension of the accession process.

"The disproportionate repression measures taken by Erdoğan forced us to urge the Commission and Council to temporary freeze the accession talks with Turkey because we can no longer remain silent in the face of Erdoğan's outrage and the evident breaches of the rule of law and human rights in Turkey.

"This resolution is a clear political message to Erdoğan that should not be misinterpreted: we want Turkey to be anchored to Europe, to democracy and to rule of law. We take our values seriously and therefore we cannot continue as if nothing happened in Turkey. We hope for the rule of law and human rights to be restored sooner rather than later. Until then, we will continue our dialogue but freeze the accession talks."

"Unfortunately, the situation leaves us with no other choice than to call for the temporary freeze of the talks. This doesn't mean we should stop our dialogue, but we have come to a point where a meaningful negotiation on EU-integration is currently not credible.

"We are not abandoning the Turkish citizens; they believe in the same values as us, and so our door remains open. We are merely reacting to what's happening in a country that aspires to join the EU. We expect the same from the EU-leaders in December."

"Turkey is, and will remain, one of our most important partners as a NATO member and as a candidate for EU membership, but the country's chances to advance in the accession process requires the full respect by the Turkish authorities of all Copenhagen criteria.

"Once again we underline that human rights and the rule of law in Turkey must be upheld and the principles of the European Convention of Human Rights fully respected."