London based magazine published a scandalous caricature of theTurkish PM Erdogan, portraying him as a kebab man. 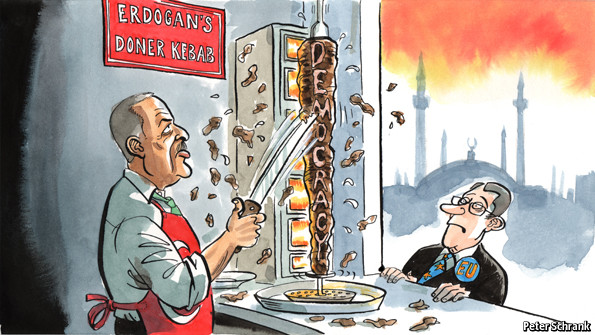 In the article titled "Going cold on Turkey", PM Erdogan was portrayed as a kebab man slicing away democracy which is represented in the form of a doner kebab (shawarma).

The magazine, known to be critical of the Turkish leader whenever possible, insisted that Erdogan risks wrecking Turkey’s chances of joining the European Union.

The magazine said, "Over the past year Turkey has seen a crackdown on protests, corruption scandals, a purge of the police and judiciary, paranoid talk of foreign plots and fifth columns, an economic slowdown and more attempts to Islamicise society."

”Until recently Mr Erdogan would boast that Europe needed Turkey, with its dynamic economy and geostrategic role, more than Turkey needed Europe. He pursued a policy of “zero problems” with his neighbours in the Middle East. When the Arab spring erupted in 2010 Turkey was held up as a model of moderate, democratic Islam. But the shine came off after his heavy-handed suppression of last June’s mass protests against plans to build over Gezi Park in Istanbul. His neo-Ottoman foreign policy fell apart when the Syrian civil war intensified and the Egyptian army unseated the country’s elected president, Muhammad Morsi, an Islamist ally. Turkey’s relations with America have been strained, not least because of a tentative decision to buy air-defence missiles from China and differences over Israel,” it continued.

The anti-graft operation that was launched on December 17 led to several high-profile arrests, including the sons of the former Turkish Economy and Interior Ministers, and the head of Halkbank, a state-owned bank.

The corruption investigation caused controversy in the Turkish political scene. Erdogan has defined the operation as a smear campaign aimed at undermining Turkish society. Erdogan has blamed the so-called ‘parallel state’, mostly backed by certain people in the police and judiciary who are widely believed to be followers of influential religious figure Fethullah Gulen’s Hizmet Movement.