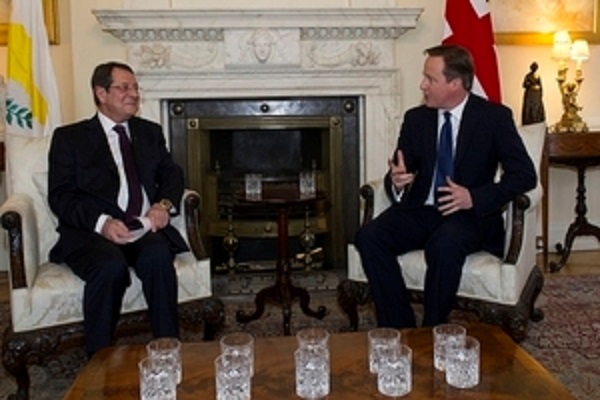 The UK and Cyprus have a long history of working closely and effectively, including as partners in the Commonwealth and EU. Both countries are committed to broadening and deepening their fruitful relations across many areas of shared interest.

The leaders discussed how the EU needs to reform to become more flexible, more competitive, and more democratic – including through a strengthened role for national parliaments, where appropriate, and the case for renewing citizens’ democratic consent and support for the EU.

They agreed to work to deliver long-term growth for their countries and the EU: through dismantling economic barriers, seizing the opportunities that new technologies present, using the educational links between the 2 countries to prepare the next generation for the challenges of tomorrow, and strengthening their financial services sectors to support business. In particular, they recognised that single market reform will support their growth agenda in Europe through simplifying regulation, supporting more cross-border trade in services, and further developing a single digital market. They agreed that reducing the cost of regulation is good for business, and is crucial for competitiveness and growth, and is a key aspect of the EU reform agenda. They reaffirmed their commitment to enlargement of the EU as a driver for peace, prosperity and progress across the continent and agreed that the accession of future Member States to the EU is dependent on them meeting all accession criteria. They also agreed that in order to maintain public support for enlargement they should explore how better to manage the impact on local communities when future countries join the EU.

The leaders spoke about the significant progress to date, and the strong commitment of the Cypriot government, to implementing the MoU with the Troika and to revitalising the economy and boosting jobs and growth. The UK will continue to work with Cyprus to share best practice in restructuring its public sector and banking system. Both countries will continue co-operation at expert level on immovable property issues, which will help boost prosperity. On energy issues, they agreed to continue close cooperation, particularly in education and training, over Cyprus’ exploration and exploitation of its natural resources in its Exclusive Economic Zone, in accordance with international law. This will enhance the EU’s energy security and will contribute economic benefits. The UK and Cyprus share a decisive commitment to addressing security threats and humanitarian issues, especially in the Middle East. The Syria crisis highlighted the potential for further cooperation and coordination between Cyprus and the UK, including with respect to the Sovereign Bases Areas, in addressing possible threats and ensuring the security and the stability of the wider region. This includes active co-operation in the drive for a political settlement in Syria, action to reduce the grave humanitarian consequences of the Syria crisis, and support to the moderate opposition forces in Syria.

Prime Minister Cameron and President Anastasiades reaffirmed their active commitment to a comprehensive settlement of the Cyprus problem, which would bring political, economic, and social benefits to the island and the region. Both leaders support a settlement agreed under the auspices of the UN Secretary General, based on the United Nations Charter and the UN Security Council Resolutions on Cyprus, as well as on the principles upon which the EU is founded, for a State of Cyprus with a single sovereignty, single international personality and a single citizenship, in a bicommunal, bizonal federation with political equality, as described in the relevant UNSCRs.

Today the UK and Cyprus successfully concluded and signed an arrangement to allow increased flexibility to develop private property within the British Sovereign Bases in Cyprus. The arrangement is important in giving greater freedom to residents and property owners within the Bases to use their property while safeguarding the UK’s effective operation of the Bases for military use and is an excellent example of the good cooperation between the 2 governments in the administration of the Bases. It enhances considerably the prospects for investment and growth.

Prime Minister Cameron and President Anastasiades look forward to continuing and strengthening cooperation in all these areas.