Sakir and a small team of friends in Bristol have raised money by collecting donations from friends, family, mosques and charities. 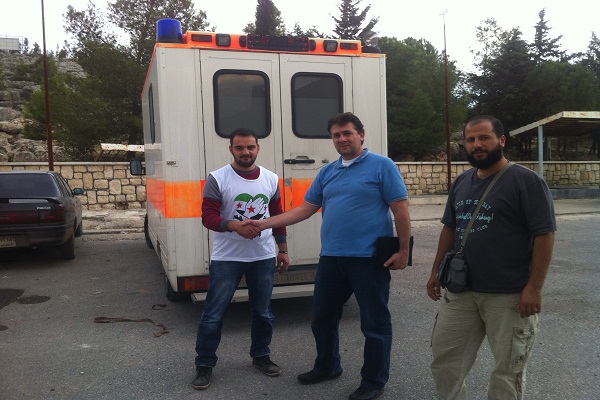 Bristol man, Sakir Yildirm, has just returned from a “one man mercy mission” to war-torn Syria. He bought an ambulance in Germany, drove across Europe and through Turkey where it was loaded with food and medicine. With the help of local relief organisations he was able to cross the border and deliver the ambulance to medical teams inside Syria. This is the second ambulance Sakir has delivered to Syria this autumn.

Sakir and a small team of friends in Bristol have raised money by collecting donations from friends, family, mosques and charities. The cost a second-hand ambulance, any extra medical equipment needed, and the expense of the journey to Syria costs about £5,000. On the journey Sakir sleeps in the ambulance refusing to waste money on accommodation.

Just two weeks ago (Sunday 28th October) Sakir left Bristol on enroute to Germany to buy the ambulance (see photos attached). He drove overland through Macedonia, Bosnia to Turkey collecting money for the journey from Muslim communities along the route. Sakir quips “It’s my second trip now so I know the way pretty well.” In Turkey the ambulance was checked by medical personnel and loaded with medicine, blankets, and food supplies.

Whilst in Istanbul Sakir spent a day alongside hundreds of witnesses, at the trial for Israel’s attack on the Mavi Marmara on 31 May 2010. Four senior Israeli commanders are being tried by Turkey as ‘fugitive suspects’. The case is being brought on behalf of 490 plaintiffs and victims including flotilla passengers and relatives of the dead and injured. Sakir, and another Bristol man where onboard the ship when it was attached. Sakir described the day “It was very moving meeting the families of the dead and injured. It brought back the terrible memories of what happened to us all. I hope it will bring some sort of justice.”

It took a further two days to complete paperwork for permission to cross the border and on Thursday 8th Sakir was able to deliver the ambulance and cargo to medical teams inside Syria. Sakir described the crossing “The border crossing was very tense. It was very grim. But ordinary people said thank you for coming to help – we respect you for leaving your family and country and coming to help us.”

Inside Syria he saw large tented camps being set up in preparation for large numbers of refugees. At one point he saw wounded people being evacuated. He says “On my first trip I’d really understood the suffering for ordinary people there. I saw people living in the basements of their houses. I saw people queuing throughout the night waiting for food. I heard shells exploding. They’ve struggling to survive with death and destruction all around them”

He continues “In one place I saw the horrendous reality war, scenes too awful to describe. And I had to take a dead person back to their family. People who can hardly get anything to eat. People getting killed or wounded. It's really upsetting. That’s why I wanted to return with another ambulance. Once I had seen the suffering I felt it was my duty”.

He goes on to say “I’m so relieved I’ve managed to do it. I just care about the ordinary people. I can’t do everything. But I want to do what I can to help. What if that was happening to my family, or to people here in Bristol, I ask myself.”

This man who has felt the need to do something many of us would be afraid to do, describes himself as “ordinary”. Some of his friends in Bristol call him “Just do it” man! Making light of the thousands of miles he is driving, he described going to Syria as "not as hard as driving to Gaza”!

SAKIR’S FIRST AMBULANCE MISSION TO SYRIA: Sakir left on his first mercy mission to Syria on 23rd September, he flew to Germany where he arranged and purchased a suitable left-hand drive ambulance. He then set off and drove on his own, overland through Macedonia, Bosnia to Turkey. The sunshine yellow ambulance, (photos enclosed) was re-fitted with emergency equipment, defibulator and oxygen. The ambulance had to wait a week at the border in Turkey for permission to cross into Syria. Once inside Syria, medical teams reported people crossing a river and carrying injured civilians. Within the hour the ambulance was hard at work ferrying the injured civilians to field hospitals.

Sakir supports himself and his family from a modest kebab business in the Fishponds are of Bristol. He is well known in Bristol for his personal humanitarian aid work. Following the attack on Gaza in the winter of 2008/2009 Sakir bought an ambulance on eBay and drove it to Gaza and donated it to a local hospital. Less than a year later he was at the wheel of a giant articulated lorry heading a convoy from Bristol with locally collected aid for the people of Gaza. In May 2010, Sakir and another Bristol man were onboard the Turkish aid ship, Mavi Marmara; as the ship was nearing Gaza they came within inches of death, when the ship was attacked by Israeli commandoes. In autumn 2011 he volunteered for the charity group IHH to distribute aid following an earthquake in Turkey.