Since 2004, 1.25 million people have been added to the population due to EU migration. That is bigger than the city of Birmingham. 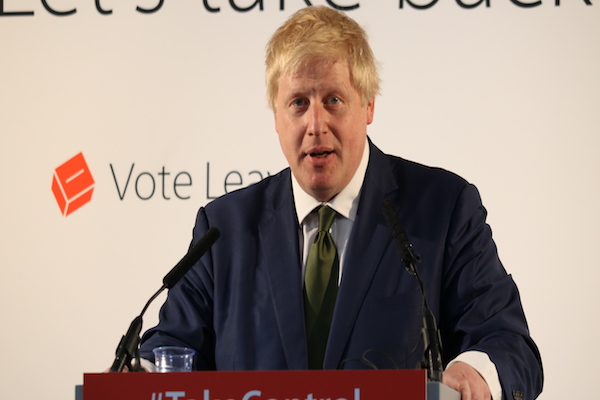 Last year, 270,000 people came to this country from the EU and net migration was 184,000. That means we are adding a population the size of Oxford to the UK every year just from EU migration.Since 2004, 1.25 million people have been added to the population due to EU migration. That is bigger than the city of Birmingham.I’ve always championed the great benefits that can come from immigration. I am the proud descendant of immigrants.I’ve seen how as Mayor of a great capital city, London has benefited in so many ways from migration. As Mayor I argued consistently for a more sensible visa policy that would welcome talented people from across the globe, people recruited on the basis of their skills.

Britain benefits from cultural influences from abroad, I'm pro-immigration, but above all I'm pro controlled immigration. People of all races and backgrounds in the UK are genuinely concerned about uncontrolled immigration and the pressure it's placing on local services. People have every right to question why we can't control our borders. We need to answer those concerns by taking back control of those borders.

But we must also face the fact that the system has spun out of control. We cannot control the numbers. We cannot control the terms on which people come and how we remove those who abuse our hospitality. This puts huge pressure on schools, hospitals and housing. It is exploited by some big companies that use immigration to keep wages down - and it is striking that the pay packets of FTSE 100 chief executives are now 150 times the average pay of people in their firms.

Worst of all, it is terrible for our democracy. People have watched Prime Minister after Prime Minister make promises on immigration that cannot be met because of the EU and this has deeply damaged faith in our democratic system.

The Prime Minister repeatedly promised that he would get a grip of this. The government told us that it would ‘keep our ambition of delivering annual net migration in the tens of thousands’. We were told that economic migrants from the EU would need to prove they had a job offer to come here - a pledge made by the Prime Minister, the Home Secretary and the Chancellor.

I am afraid that Brussels sent them packing, and in fact 77,000 have come since the Prime Minister made that promise.

The Government has failed because of the simple reality that inside the EU we cannot control immigration - it is literally impossible because we have no choice but to accept the principle of free movement and the European Court has ultimate control over our immigration policy. This has led to the absurd situation in which we stop highly qualified people coming from around the world who could contribute enormously to our society because we cannot stop millions of unskilled people coming here from the EU.

Even worse, the Prime Minister’s deal has given away control of immigration and asylum forever. His deal does nothing to solve this crisis and has not brought back a single power for the UK. The rogue European Court now controls not just immigration policy but how we implement asylum policy under the Charter of Fundamental Rights.

And, on top of all of this, new countries are in the queue to join the EU and the EU is extending visa-free travel to the border of Syria and Iraq. It is mad.

The only way to take back control of immigration is to Vote Leave on 23 June. The public should be able to vote for those who make the laws of this country including on immigration. It is intolerable to continue without democratic consent for Britain’s immigration policy.

That will be best for our public services, particularly the NHS. It will also allow us to have a fairer immigration system that is better for Britain, stops discriminating on the basis of where you come from, and instead allows us to pick people on the basis of skills.

Imagine how much stronger we will be, and how much more respected in the world, when we have an immigration policy that stops discriminating on the basis of whether you are an EU citizen and instead selects people on the basis of their contribution to this country.

The British public support immigration but they want it controlled by those who they elect. They are generous but feel their generosity has been abused. They are right. On the 23 June they will get their chance to take back control.

The Office for National Statistics (ONS) today published statistics on ‘Migration in the UK: May 2016’. The release can be read here.

The Prime Minister has categorically failed to reduce net migration to the tens of thousands as he repeatedly promised.

The UK population is rapidly expanding as a result of migration from the EU. Since 2004, 1.25 million persons have been added to the population, more than the population of Birmingham.

In 2015, 77,000 persons came from the EU looking for work despite promises by David Cameron that EU migrants should have to have a job offer to come to the UK.

The Prime Minister did not even ask for this as part of the renegotiation as it was illegal under EU law.

Last year, 270,000 persons came to the UK from the EU, the equivalent of a city the size of Newcastle.

The Prime Minister has categorically failed to reduce net migration to the tens of thousands as he repeatedly promised.

The 2010 Conservative Manifesto promised that ‘we will take steps to take net migration back to the levels of the 1990s – tens of thousands a year, not hundreds of thousands’ (Conservative Party, 2010, link).

In his 2014 conference speech, Cameron described: ‘Numbers that have increased faster than we in this country wanted at a level that was too much for our communities, for our labour markets. All of this has to change – and it will be at the very heart of my renegotiation strategy for Europe. Britain, I know you want this sorted so I will go to Brussels, I will not take no for an answer and when it comes to free movement – I will get what Britain needs’ (Conservative Press Office, 1 October 2014, link).

The 2015 Conservative Manifesto stated the Government would ‘keep our ambition of delivering annual net migration in the tens of thousands’ (Conservative Party, 2015, link).

In her speech to the 2015 Conservative Party conference in Manchester, the Home Secretary, Theresa May, said: ‘not all of the consequences can be managed, and doing so for many of them comes at a high price… But even if we could manage all the consequences of mass immigration, Britain does not need net migration in the hundreds of thousands every year... The evidence – from the OECD, the House of Lords Economic Affairs Committee and many academics – shows that while there are benefits of selective and controlled immigration, at best the net economic and fiscal effect of high immigration is close to zero.  So there is no case, in the national interest, for immigration of the scale we have experienced over the last decade. Neither is it true that, in the modern world, immigration is no longer possible to control… The numbers coming from Europe are unsustainable and the rules have to change’ (Independent, 6 October 2015, link).

This is bigger than the population of Birmingham (Birmingham City Council, 2014, link).

Last year, 77,000 persons came from the EU looking for work.

If this rate of migration of jobseekers continues for a decade, 777,000 jobseekers will come to the UK as a result. This is greater than the population of Glasgow (National Records of Scotland, 2015, link).

The Prime Minister, the Chancellor of the Exchequer and the Home Secretary promised EU migrants should have to have a job offer to come to the UK.

The Chancellor of the Exchequer, George Osborne, has said: ‘What we’re going to address is this question of how freedom of movement operates in the 21st century. It was never envisaged that you would have such large numbers of people coming, people coming who don’t have job offers’ (The Guardian, 3 November 2014, link).

The Home Secretary, Theresa May, has argued: ‘when it was first enshrined, free movement meant the freedom to move to a job, not the freedom to cross borders to look for work… we must take some big decisions, face down powerful interests and reinstate the original principle underlying free movement within the EU’ (Sunday Times, 29 August 2015, link).

The Prime Minister did not even ask for this as part of the renegotiation as it was illegal under EU law.

The renegotiation agreement notes that EU citizens are ‘entitled to reside... [in the UK] solely because of their job-search’ (European Council, 19 February 2016, link).

This is because it is illegal under EU law. As early as 1991, the European Court held that the ‘Treaty entails the right for nationals of Member States to move freely within the territory of the other Member States and to stay there for the purposes of seeking employment’ (R v Immigration Appeal Tribunal, Ex parte Antonissen [1991] ECR I-745, link).