A detailed view of the undercarriage of the Virgin Atlantic Boeing 747 as it passed overhead at Gatwick airport, before landing safely, 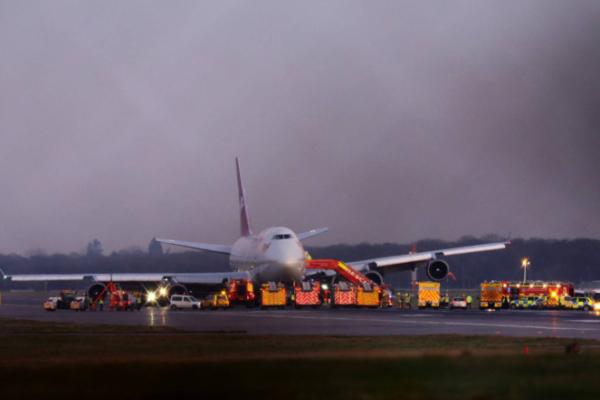 A spokesman for Gatwick airport said that all the passengers had disembarked from the plane – originally headed to Las Vegas – and that “some minor injuries” had been reported. The runway at Britain’s second largest airport was closed for several hours, with incoming flights diverted to alternative airports and departing aircraft delayed as the drama affected the travel plans of thousands of passengers.

A Virgin Atlantic plane carrying 447 passengers was forced to make an emergency landing at Gatwick after landing gear problems hit a US-bound flight.

A detailed view of the undercarriage of the Virgin Atlantic Boeing 747 as it passed overhead at Gatwick airport, before landing safely. Photograph: Jordan Mansfield/Getty Images Hundreds of holidaymakers applauded in relief after their pilot returned the Boeing 747 to base safely following an unconventional journey that included dumping fuel at sea and flying low over the Gatwick control tower twice so that air traffic controllers could scrutinise the main undercarriage with binoculars.