SpaceX has made 13 successful launches this year 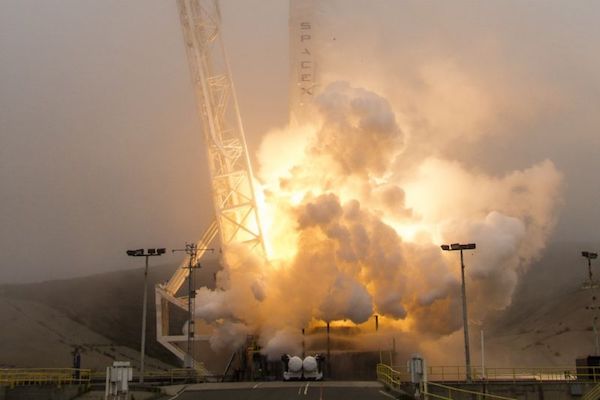 Under dark skies, SpaceX's Falcon 9 rocket launched on Monday morning from California. After sending the rocket's second stage into low-Earth orbit, the first stage then made a successful landing offshore, on a droneship. Meanwhile, the second stage entered a coast orbit, preparing to fire again later Monday morning and release 10 satellites into orbit. This was the 14th orbital launch of the year for SpaceX. Original post: SpaceX has made 13 successful launches this year, and with every additional flight it continues to add to its record for total number of missions in a calendar year. The company's previous high-water mark for launches came in 2016, with eight. But SpaceX flew no additional missions after Sept. 1 last year, standing down following a fueling mishap that destroyed a Falcon 9 rocket and its payload on the launch pad.

Now, SpaceX is going for two launches in three days. On Monday, the company will attempt to launch 10 satellites into orbit about 700km above the Earth for Iridium. Scheduled for 8:37a.m. ET, the launch will take place from Vandenberg Air Force Base in California. This is SpaceX's third of eight launches for Iridium, which is establishing a new constellation of communications satellites known as Iridium NEXT. After launching, SpaceX will attempt a return landing of the first stage aboard the "Just Read the Instructions” droneship in the Pacific Ocean. The webcast below should begin 15 to 20 minutes before the launch attempt.

Then, on Wednesday, SpaceX is scheduled to attempt a launch from Kennedy Space Center at 4:30pm ET. This mission will put the SES-11/EchoStar 105 satellite into geostationary orbit. One of the highlights of this flight is that SpaceX will be flying a "used" first stage booster—only the third time the company has attempted this. A droneship landing attempt in the Atlantic Ocean is anticipated.

Should both launches be successful, SpaceX will maintain a pace for 2017 that could see the California-based company fly more orbital rockets this year than any other company or country around the world. Additionally, SpaceX would remain on track for about 20 launches in 2017, which could see the company finally begin to fulfill its promises of rapid, reusable launch.

SpaceX won't be the only other launch provider in action on Monday. Early Monday morning, US time, a Chinese Long March 2D rocket is scheduled to launch a communications satellite for Venezuela. Later on Monday, a Japanese H-2A rocket will attempt to launch a Michibiki 4 navigation spacecraft.