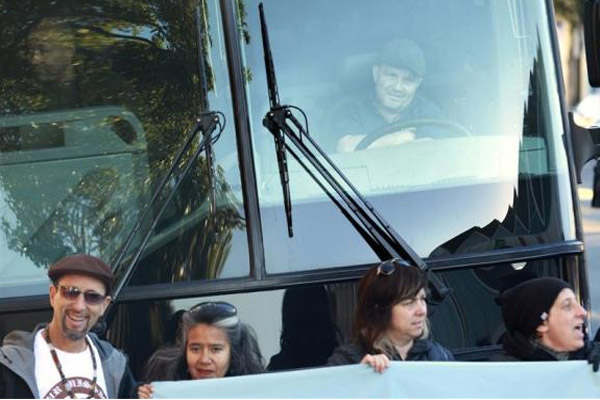 About 40 protesters surrounded a corporate bus in the Mission district as it was picking up employees for the morning commute, preventing it from leaving for about 30 minutes. The company for which the bus was headed was not immediately clear. A small sign in the front window said only "Main Campus, Ridgeview." An Internet search showed that Apple has offices on Ridgeview Court, not far from its headquarters in Cupertino, California, 40 miles south of San Francisco. Two Google buses in Oakland were also targeted by protesters on Friday morning, a source familiar with the matter told Reuters. "We want the ruling class, which is becoming the tech class, to listen to our voices and listen to the voices of folks that are being displaced," said a protester in San Francisco who addressed the crowd by loudspeaker from the back of a pickup truck parked in front of the bus. Protesters unfurled a banner that read "Eviction Free San Francisco" and distributed flyers titled "San Francisco: A tale of two cities."

Google said in a statement that the company does not want to cause any inconvenience to Bay Area residents. "We and others in our industry are working with San Francisco Municipal Transportation Agency to agree on a policy on shuttles in the city."

The buses have become among the most visible symbols of what some complain is the technology-driven gentrification of San Francisco, with young, well-paid tech workers forcing out less affluent residents, and city policies that some critics have said are too generous to the tech industry.

Twitter Inc, which won an exemption on the city's 1.5 percent payroll tax after it threatened to leave San Francisco in 2011, has been a frequent target of critics.

Bus advocates have said they ease traffic on already clogged highways as workers give up driving their cars to ride the buses, which usually have plush seats and Wi-Fi.

While Friday's protest in San Francisco seemed aimed at the tech industry in general, the protests in Oakland seemed to be more specifically targeted at Google. A photo posted on Twitter by a Google employee inside the bus showed two people outside holding a banner that read "Fuck Off Google."

Another photo he posted showed what appeared to be a smashed window on the Google bus.

Sarah Sherburn-Zimmer, one of the organizers of the protest in San Francisco said she was aware that other people were planning bus protests in Oakland on Friday, but that the group was not affiliated with the San Francisco protest.

"The only real connection is that most of our communities are being heavily displaced and people are very angry," she said.

Rents in San Francisco have surged. The median rent on a two-bedroom apartment rose 10 percent over the last year to $3,250, according to online real-estate company Trulia.

Evictions rose 25 percent to 1,716 in the 12 months ended in February 2013, according to a report by San Francisco's budget and legislative analyst.

A recent study by Bay Area Council Economic Institute found that for each job created in the tech industry, roughly 4.3 other jobs are created, such as dentists, teachers and cooks. That statistic was questioned by some of the protesters.

"The one thing that I do see is actually less people making more money, and they're not from here," said Lisa Garcia, who works with Poor magazine and participated in Friday's protest.

Tech workers have been good for business, said a man who identified himself as Hishal and the owner of Muddy's Coffee House, which is near a bus stop used by tech buses. "They are good people." But, he said, tech companies should pay the city when their buses use public bus stops.

"It's not fair that a lot of companies are using the infrastructure of the city without having to pay," he said.