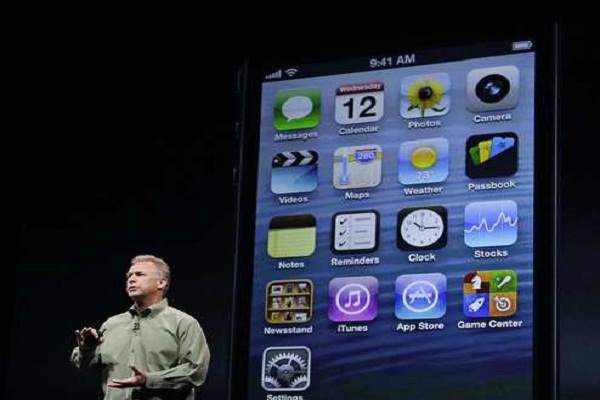 The firm said it was 18% thinner and 20% lighter than the iPhone 4S. After months of rampant rumors and hype, Apple debuted its latest smartphone Wednesday. The iPhone 5 will work on multiple 4G frequencies, including the one just launched by EE, the company formed by T-Mobile and Orange. EE turned on its 4G network yesterday, promising coverage in four UK cities shortly and 12 more by the end of the year.

Other networks will have 4G next year, and EE will launch other handsets imminently, but for now the iPhone 5 is on its own. The device's new size allows it to display an extra row of app icons on its home screen. The firm said it was 18% thinner and 20% lighter than the iPhone 4S. The screen measures 4in (10.2cm) which is still smaller than rival devices from Samsung, Nokia, Motorola and HTC.

It said it would work on Everything Everywhere's (EE) 4G LTE network in the UK. The new screen offers a 16:9 ratio, matching that of widescreen televisions.

The news is likely to give the network operator - which runs the local Orange and T-Mobile services - an advantage against its rivals which will not launch the higher-speed data service until 2013.

"I think it's obviously what the other networks feared would happen," said Matthew Howett, a telecoms analyst at Ovum. "The question will be how many non-EE customers make the switch."