Steve Ballmer, a passionate salesman who has been a central figure at Microsoft Corp for more than three decades, unexpectedly announced his retirement as chief executive on Friday 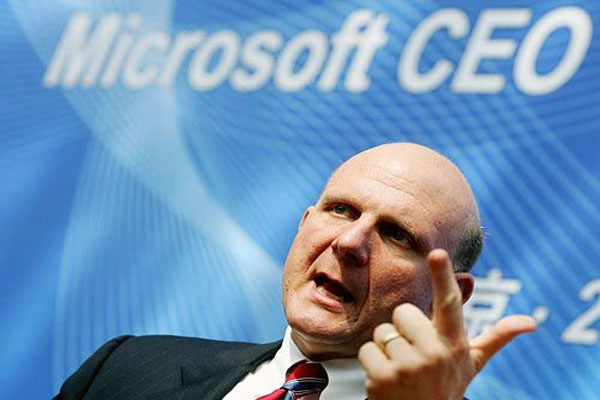 The surprise move sent the company's share price up 7 percent, reflecting a widespread view that Ballmer is not the man to reverse the fortunes of a company that remains highly profitable but has failed to navigate the transition to the mobile computing era. Ballmer's planned exit comes just weeks after the company announced a major reorganization and delivered an earnings report that showed across-the-board weakness in the business, including dismal sales of the company's new Surface tablet and a lukewarm reaction to the crucial Windows 8 operating system. Microsoft said it had engaged the executive search firm Heidrick & Struggles and would consider both internal and external candidates to succeed Ballmer - underscoring the lack of a succession plan at a company where many talented executives have been squeezed out over the years. Ballmer will stay on for up to a year until a new CEO is found.

A close friend and confidant of co-founder Bill Gates since the company's earliest days, the 57-year-old Ballmer formally notified the company two days ago of his intention to retire, according to a regulatory filing. In an interview with the trade publication ZD Net, director John Thompson said the search for a successor had in fact been underway for some time.

"We are well down the path in the search," said Thomson, who is leading a search committee that also includes Gates.

Still, the timing of the announcement and the lack of a succession plan suggest the recent setbacks may have spurred the company's board to act. Gates remains chairman of the board, which has historically followed his lead.