Bus Action Plan sets out TfL’s priorities for faster journeys, an improved customer experience, and the decarbonising of the network

Buses are crucial to London’s recovery, as the city’s most affordable, accessible and widely available mode of public transport 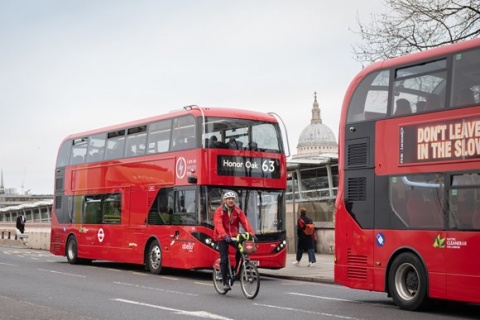 Five priorities to drive up bus ridership, reduce car dependency and help transform London into a net zero city by 2030 are at the heart of the plan.Customers are already seeing the plan being brought to life on route 63 and a rapidly increasing number of zero-emission buses across the network .Investment in London’s buses creates jobs and growth across the UK, but lack of TfL funding puts these at risk.Transport for London (TfL) has today (11 March) published its long-term plan for buses, which will see the modern bus network attract more customers and help the capital become net zero by 2030. Buses are already the most used form of public transport in the capital, and TfL’s Bus Action Plan will create an even more attractive alternative to car use by focusing on five areas:

An inclusive customer experience – a modern, relevant bus network that allows for spontaneous, independent travel, including improved customer information and bus station refurbishment; with actions including upgrading more existing bus stops to meet the wheelchair accessible standard
Safety and security – a safe, secure bus network, with no one killed on or by a bus by 2030, and with all elements of the Bus Safety Standard implemented by 2024; and ensuring all customers and staff feel confident on the bus network travelling day and night, including through improved bus driver training
Faster journeys – a faster and more efficient bus network, with journeys 10 per cent quicker than in 2015, with initiatives including the aim to introduce 25km of new and improved bus lanes by 2025
Improved connections – a bus network better suited to longer trips with better interchanges, especially in outer London; and ensuring London residents remain close to a bus stop
Decarbonisation and climate resilience – a zero-emission bus fleet to tackle climate change and improve air quality, working with operators, boroughs and suppliers to reduce the cost and difficulty of infrastructure upgrades needed to enable the transition of the bus fleet; and safeguarding the network from extreme weather conditions

The plan can be seen in action on the route 63 from King’s Cross to Honor Oak, where new higher specification all-electric buses were launched last month. The buses bring together a range of customer-friendly features for the first time, including a more welcoming feel, USB charge points and mobile phone holders, a larger wheelchair and buggy area and better real time travel information on board. A new bus lane on the New Kent Road section of the route is improving journey times and reliability in line with the plan. All vehicles meet TfL’s Bus Safety Standard and feature upgraded CCTV, enhancing security.

Louise Cheeseman, TfL’s Director of Buses, said: “We are excited to set out our bus strategy for the rest of this decade, which is all about creating a bus service reflective of our customers and their evolving needs, supporting a sustainable recovery from the pandemic, making London a net zero city by 2030 and improving people’s safety and wellbeing.

“Investment in buses is imperative in dealing with the climate crisis and cleaning up the toxic air that is damaging our health. Our red bus network is fundamental to preventing congestion and, more widely, is a catalyst for unlocking homes and employment in London, as well as creating green jobs across the UK. Buses are already an efficient, convenient form of public transport and London has the largest green bus fleet in western Europe, but we need to raise the bar. The Bus Action Plan sets out how we will meet the challenges now and into the future, making buses cleaner and greener, more efficient and an option for all our city’s diverse communities. Ultimately, it’s about making the bus the natural choice over the car.

“We can’t do it by ourselves, and in publishing the action plan today we’ll be well placed to start more engagement over the coming months on our shared objective of making London a better place to live.”

Keywords:
Bus Action PlanTflLondons RecoveryPublic Transport
Your comment has been forwarded to the administrator for approval.×
Warning! Will constitute a criminal offense, illegal, threatening, offensive, insulting and swearing, derogatory, defamatory, vulgar, pornographic, indecent, personality rights, damaging or similar nature in the nature of all kinds of financial content, legal, criminal and administrative responsibility for the content of the sender member / members are belong.
Related News