The online store is the first official sales outlet of Apple in Turkey. 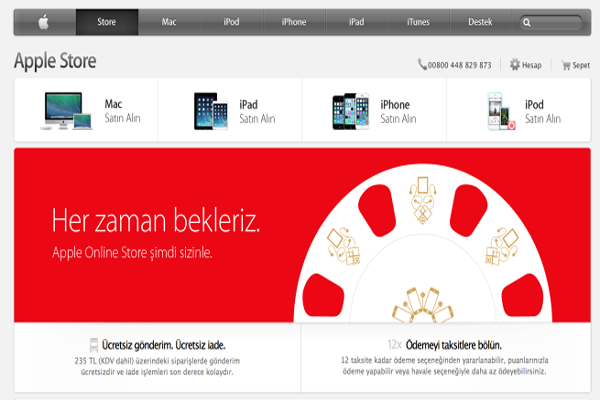 The long wait for Turkish technology fans is over as tech giant Apple has finally opened an online store in Turkey. Located at store.apple.com/tr, the online store offers all the latest Apple products, access to expert assistance via video conference or phone, the option to set up a payment plan, discounts for cash payments and a cost-free, money back guarantee on products up to 14 days after purchase. The online store is the first official sales outlet of Apple in Turkey. Besides the iPhone, Mac, iPad and iPod, various accessories will be offered to Turkish consumers. Apple, which was ranked as the Best Global Brand by Interbrand in 2013, is known for its focus on customer satisfaction. The Turkish Apple Online Store reflects that same value as well.

Customers can get real-time expert assistance from professional Apple sales representatives in Turkish, via video conference or by phone call. Apple Online representatives are available throughout the week between 9 a.m. and 6 p.m. local time. Apple confirmed that these sales representatives do not get commission on any sales and are thus trained to provide the best service possible to every customer's needs and requirements.

If a customer has purchased an Apple product from the site and is not satisfied, they have the ability to return it within 14 days at no cost. Apple Online Store even offers the option of setting up a payment plan of up to 12 months, depending on your credit card company, and a discount for customers who pay in cash using a bank transfer. It provides a range of secure online payment methods as well.

The online Apple Store also features free personalized engraving on iPads, iPod touches and iPod nanos purchased from the site. A wide selection of accessories are also offered, including limited edition iPhone cases specially designed for Turkish consumers and that cannot be purchased anywhere else in the world.

According to experts, one of the biggest reasons Apple has entered the online market in Turkey is the growing e-commerce market in the country. Turkey's Interbank Card Center (BKM), reports that the volume of online purchasing with credit cards in Turkey hit TL 30.6 billion in 2012, a growth of 35 percent from 2011. It is expected that this number will reach TL 40 billion at the end of 2013 and will exceed TL 350 billion in 2023.

According to statistics from the Information and Communications Technologies Authority (BTK), the number of broadband Internet subscribers in Turkey in 2012 reached 20 million, more than tripling since 2008, when there were only 6 million subscribers.

Next up: Apple Store in İstanbul

The Turkish online store will not be Apple's only investment in Turkey. At the Goldman Sachs Technology Conference in February 2013, CEO Tim Cook confirmed the opening of an Apple Store in İstanbul, amidst a big international retail push -- Apple has more than 400 stores around the world. It is rumored that the Apple Store in İstanbul will be opened in the luxury shopping mall that is part of the Zorlu Center, which opened only a couple of weeks ago. However, no official announcement has been made yet.