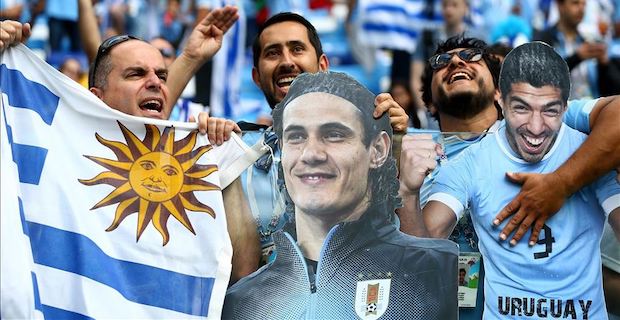 Uruguay beat Ecuador 4-0 in Copa America group match on Sunday. Uruguay took an early lead in the Group C match in Brazil's Belo Horizonte, as midfielder Nicolas Lodeiro put the ball into Ecuador net in the penalty box. In the 24th minute of the match, Ecuador were down to 10 men as right back Jose Quintero was sent off after a foul on Lodeiro. In the 32nd minute of the game, Paris Saint-Germain striker Edinson Cavani made a close range volley to double the gap, 2-0.

Near the end of the first half, Uruguay made it three as Barcelona star Luis Suarez easily found the net. Lodeiro crossed the ball from corner, Uruguay defender Martin Caceres flicked the ball to Suarez and Suarez scored as he was unmarked in the penalty area.

In the 77th minute of the game, Ecuadoran defender Arturo Mina scored an own goal, which meant a 4-0 lead for Uruguay.

Following this victory, Uruguay became the Group C leader, having three points. Ecuador is now in the last place of this group.

The other Group C teams, Chile and Japan will face each other on Monday.

In another match last night, Group B team Paraguay drew against Qatar 2-2 in Maracana Stadium in Rio de Janeiro.

Colombia is leading the Group B, having three points. Paraguay and Qatar have one point each. South America's football giant Argentina didn't get any point, coming last in standings.

On Saturday, Colombia upset Argentina 2-0, as Argentina made a bad start to the tournament.

Keywords:
UruguayEcuadorCopa America
Your comment has been forwarded to the administrator for approval.×
Warning! Will constitute a criminal offense, illegal, threatening, offensive, insulting and swearing, derogatory, defamatory, vulgar, pornographic, indecent, personality rights, damaging or similar nature in the nature of all kinds of financial content, legal, criminal and administrative responsibility for the content of the sender member / members are belong.
Related News