'Thorough investigation' to be conducted into incident during PSG-Basaksehir match 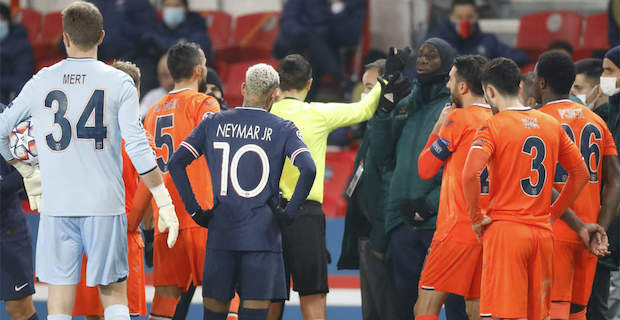 Europe’s football governing body vowed late Tuesday to launch an intensive investigation into an alleged racist incident during a Champions League match between Paris Saint-Germain (PSG) and Medipol Basaksehir.  "UEFA is aware of an incident during tonight’s Champions League match between Paris Saint-Germain and Istanbul Basaksehir and will be conducting a thorough investigation," it said on Twitter. It added that “racism, discrimination in all its forms, has no place within football.” Tuesday's match on PSG's home ground at the Parc des Princes stadium in Paris was postponed after an allegedly racist remark targeting the Turkish club's assistant manager, Cameroonian national Pierre Webo. In the 17th minute, Webo argued with the referee of the match about a position. But the fourth official told the referee to send Webo off and he was shown a red card. Webo said the official, Sebastian Coltescu of Romania, had used a racial term when identifying him.  The Turkish team headed to the dressing room in protest against Coltescu and refused to return to pitch to play the game if Coltescu stayed on the turf to officiate. Meanwhile, Basaksehir chairman Goksel Gumusdag said Coltescu was discharged from his duty for this match over his remarks. Basaksehir's CEO Mustafa Erogut said the match will resume Wednesday evening and all four officials of the game will be changed. UEFA also confirmed that the rest of the match will be held Wednesday "with a new team of match officials.” Dutch referee Danny Makkelie will officiate Wednesday's match in Paris. His assistants will be Mario Diks from the Netherlands and Polish national Marcin Boniek. The fourth official will be Bartosz Frankowski from Poland. The match will resume at 6:55 p.m. local time (1755GMT). Before the break, the score was 0-0.

"All forms of racism go against the values held by Paris Saint-Germain, the club’s Chairman, staff and players," PSG tweeted.

French star Mbappe tweeted: "SAY NO TO RACISM. M.WEBO WE ARE WITH YOU,” while the team's 25-year-old French defender Kimpembe sent out a tweet, saying "No to Racism."

Paris Saint-Germain has also retweeted Basaksehir's tweet in which the Turkish club shared UEFA's "No to Racism" campaign banner to protest Coltescu.

Racism is still one of the major global problems in sports and FIFA and UEFA have been fighting against it.

In recent years, UEFA released a video to raise awareness about racism, with many football stars such as Cristiano Ronaldo, Lionel Messi and Zlatan Ibrahimovic joining the "No to Racism" campaign.

Keywords:
UEFARacist Incident
Your comment has been forwarded to the administrator for approval.×
Warning! Will constitute a criminal offense, illegal, threatening, offensive, insulting and swearing, derogatory, defamatory, vulgar, pornographic, indecent, personality rights, damaging or similar nature in the nature of all kinds of financial content, legal, criminal and administrative responsibility for the content of the sender member / members are belong.
Related News