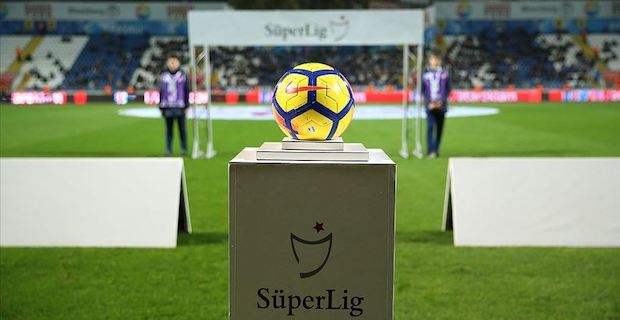 Turkey's top-tier Super Lig will resume Friday after a three-month break due to the coronavirus pandemic. During this period, there was a spate of coronavirus cases in Turkish football as games in Turkey were held at empty stadiums after the first virus case was detected on March 11. Shortly after, the Turkish Football Federation (TFF) suspended domestic competitions in light of the COVID-19 crisis.

Measures against coronavirus at stadiums

In line with an announcement by the TFF, strict measures will be enforced at league games.

* The disinfection of all rooms will be provided, before and after the games.

* A total of 296 people, including footballers, will be at the empty stadiums.

* Hand sanitizers will be placed on the benches and edge of the field 20 meters apart.

* People who sit in the VIP stands will sit diagonally, leaving three seats free, while those in the rear row seats will sit at a crosswise position relative to the front row, leaving one row empty.

* Team and referee vehicles will enter and leave the stadiums at least 15 minutes apart.

* Six ball boys will serve in the matches, including two on the touchlines and one behind the goal post. Ball boys between 20 and 30 years old will wear masks and gloves.

* At least 15 balls will be used in the matches and the balls will be kept in a closed area after disinfection by the home side officials on match day.

* No one will touch the balls until the fourth referee receives them.

* The people on the bench will have to sit leaving at least two seats empty.

* The players will ensure that the distance between each other and the referee is at least 1.5 meters. There will be no handshakes and team photos will not be taken among the footballers.

* The fourth referee of the game will determine by which areas the footballers will warm up in and how many people can be in the warm-up areas at the same time.

* The Football Federation Health Board will appoint a doctor who is the Health Precautions Controller for each competition.

* At the entrance to the stadium, players, technical staff will be tested for their temperature.

* Polymerase chain reaction (PCR) testing and antibody testing will be compulsory for clubs' footballers, technical and support teams, and officials two days before their match.

* PCR testing and antibody testing will be performed on broadcaster and media employees two days before each match.

* According to the test results of the players on the A-list of the teams, if the number of those who will take part in the competitions falls below 14, the match will not be played and the match will be postponed to a later date.

Clubs in the Super Lig will be allowed to make up to five substitutions during games as part of temporary changes for the rest of the season.

However, additional substitutions (two) will be permissible in extra time.

Breathtaking race for the title

The Turkish top-flight campaign was suspended in March. Trabzonspor sit atop the table with 53 points followed by Medipol Basaksehir with the same number of points with eight matches remaining.

With 50 points, Galatasaray are in the third spot and Demir Grup Sivasspor are in fourth place with 49 points.

Also, Besiktas are in fifth place with 44 points, Alanyaspor are in the sixth spot with 43 points and seventh-placed Fenerbahce have 40 points.

In the opening match of the league, Fenerbahce will play against HES Kablo Kayserispor in Istanbul while Goztepe will host Trabzonspor in Izmir.

Here are fixtures for week 27:

Standings of the top five teams in Super Lig: 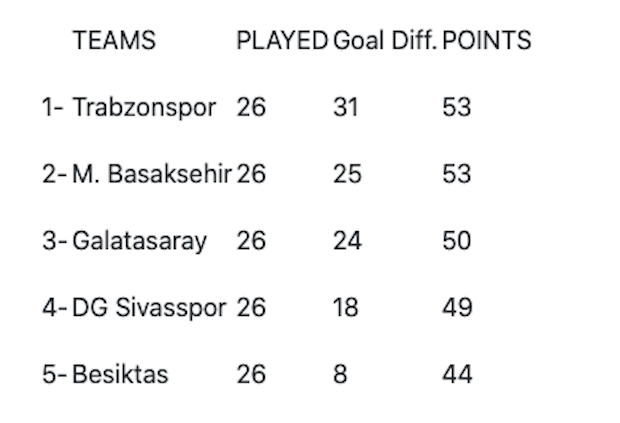 Keywords:
Turkish Super LigCoronavirus
Your comment has been forwarded to the administrator for approval.×
Warning! Will constitute a criminal offense, illegal, threatening, offensive, insulting and swearing, derogatory, defamatory, vulgar, pornographic, indecent, personality rights, damaging or similar nature in the nature of all kinds of financial content, legal, criminal and administrative responsibility for the content of the sender member / members are belong.
Related News