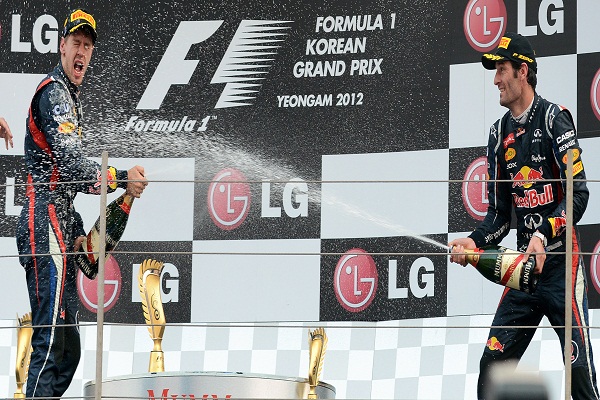 Just as he did in Suzuka, Sebastian Vettel won as he pleased in Korea, but this time Red Bull team mate Mark Webber followed him home to create the first one-two finish of any team in the 2012 season. Vettel’s success moved him into a six-point lead in the world championship, but third place for Ferrari’s Fernando Alonso kept the Spaniard in play on a day when things fell apart for McLaren. We take a team-by-team look at the race form in Yeongam…

Red Bull owned the race from the start, and once he had taken the lead Vettel never needed to look back. His only issues were a lock-up going into Turn Three on the 35th lap prior to his second pit stop, and the need to nurse his front tyres in the closing laps. Webber was unhappy with his car’s launch from pole position, though generally those who started on the inside, so-called ’dirty’ line seemed to get away better. He was also unhappy not to have been told of Vettel’s tyre problems. The success makes Vettel the favourite to repeat his title successes of 2010 and ’11.

Ferrari weren’t fast enough to challenge Red Bull, but third and fourth places keeps them in play for the title campaign. Interestingly, Alonso was clearly not as quick as Massa, who could close in at will on his team mate in his most convincing performance of the season but, of course, was not allowed even to think of passing. Their points haul moves the red team ahead of McLaren in the constructors’ stakes. (Published on formula1.com)