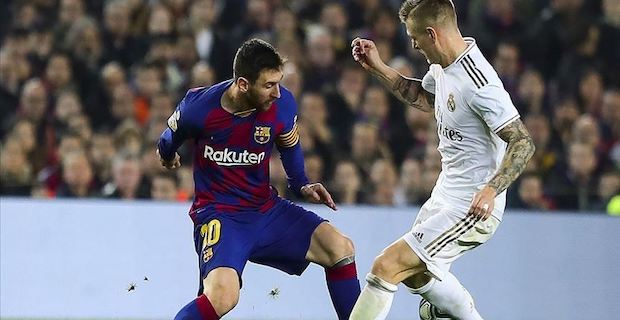 A night of upsets saw giants Real Madrid and Barcelona knocked out of Spain’s Copa del Rey on Thursday. The shock quarter-final results mean the cup final will not feature either of the country’s top two teams for the first time since 2010.  A late charge was not enough to save Zinedine Zidane’s Madrid as they lost 4-3 at home to Real Sociedad.  "Los Blancos" (The Whites) were down 3-0 by the 56th minute with Sociedad’s young guns Martin Odegaard and Alexander Isak on the scoresheet.  Norwegian midfielder Odegaard opened the scoring in the 22nd minute and the game reached half-time with the score at 1-0.

Sociedad were the livelier side in the second half and Swedish forward Isak found the net twice in the space of two minutes, scoring on the 54th and 56th minute.  Brazilian left-back Marcelo pulled one back for Madrid three minutes later before Sociedad went up 4-1 through midfielder Mikel Merino in the 69th minute. The La Liga leaders gave the game a thrilling finish as winger Rodrygo found the net in the 81st minute and defender Nacho Fernandez made it 4-3 in the 93rd minute.  Sociedad defender Andoni Gorosabel’s sending off in the 95th minute added more late drama but there was no time left for Madrid to capitalize on the advantage.

Reigning La Liga champions Barcelona were dumped out of the cup by Athletic Bilbao. The game at San Mames Stadium saw little in terms of scoring action and was settled by Bilbao forward Inaki Williams’ stoppage time goal.  Barcelona hardly threatened in the match and could only muster up around four scoring opportunities despite the presence of Argentinian superstar Lionel Messi. Spanish striker Williams won the match for Bilbao on the 93-minute mark, nodding home a whipped cross past Barca keeper Marc-Andre Ter Stegen.  The night’s other matches saw Granada beat Valencia 2-1 and Mirandes defeated Villarreal 4-2 to qualify for the semis.

Keywords:
Real MadridBarcaSpanish Cup
Your comment has been forwarded to the administrator for approval.×
Warning! Will constitute a criminal offense, illegal, threatening, offensive, insulting and swearing, derogatory, defamatory, vulgar, pornographic, indecent, personality rights, damaging or similar nature in the nature of all kinds of financial content, legal, criminal and administrative responsibility for the content of the sender member / members are belong.
Related News